With the madness of the 2018 NCAA Tournament starting bright and early tomorrow morning (12:00 PM ET, Thursday, March 15), it’s time to set the stage for all the action that lies ahead with our latest compendium of props and odds.

Most Outstanding Player, most-likely upsets, first ejection, highest-scoring game, next coach fired: it’s all below, along with a small dose of Trump, because “Madness” is right in the name of this tournament.

Note: the odds-lists below do not necessarily include only the top candidates. Odds for additional teams, players, coaches, and outcomes are available upon request.

Marvin Bagley and Deandre Ayton can take over games like no other players in the nation. With #2 Duke a lot more likely to make a title run than #4 Arizona, Bagley has the shortest odds for MOP. He’s followed by Nova’s two standouts, Brunson (who might steal Player of the Year from Trae Young) and Mikal Bridges (who’s soon to be a top-ten pick).

Not only does Demontrae Jefferson lead the nation in techs, he also has one of the earliest chances to pick one up, playing in the First Four in Dayton.

Grayson Allen has toned it down this year after picking up four techs in 2016-17. He’s still liable to throw the odd hip-check, though, and Duke plays fairly early on Thursday, like the rest of the players at the top of the list.

If no one gets teed-up on Thursday, Auburn’s Malik Dunbar (six technical fouls) and West Virginia’s Sagaba Konate (four) are decent bets on Friday.

Just like with the player prop, above, this list is based in large part on opportunity. The Syracuse/ASU First Four matchup gives the animated Boeheim and the even more  animated Hurley the first shot at getting a technical. Bobby’s more subdued little brother, Dan, will get the first opportunity on Thursday.

Lon Kruger (Oklahoma) will also have his shot in that game, but he’s more likely to give the refs a nice Pepperidge Farms gift basket than yell profanities at them.

The best bets to earn the most technical fouls in the tournament are the teams that collect techs at a high rate and are likely to play multiple games. Auburn is vulnerable as a #4 without Anfernee Mclemore, but they are still big favorites to get by Charleston and they were one of the most teed-up teams in the nation (10).

Xavier and Kentucky both had seven apiece, while West Virginia and Arizona earned six each. Duke only had two this year, but you know the potential is there, and they have a great chance to play at least four games.

Seton Hall (8) and San Diego State (8) make the list based on volume, alone.

For some reason, Wichita State doesn’t play a lick of defense this year. Neither does Marshall. Meanwhile, the Shockers have the fourth-most efficient offense in the nation and the Herd play at the sixth-highest tempo. Here comes a track meet!

Hating on Trae Young is the new loving Trae Young. But the fact remains: he’s the highest scoring player in the nation; he jacks a ton of shots most nights; and he can hit from pretty much anywhere inside halfcourt.

Facing Rhode Island and bulldog guard Jared Terrell is not an easy matchup in the Round of 64, but it’s still softer than what he faced most nights in the guard-rific Big 12.

The chances that Penn upsets Kansas are being overstated. It’s still more likely than several of the #2 seeds falling though, and perhaps the best chance a #16 seed has had in years.

Odds a punch is thrown in …

A punch is more likely in a lopsided game than a close one. A punchis also more likely when guys like Grayson Allen and JP Macura are on the floor. Macura is the one who goaded Cincinnati coach Mick Cronin into doing this …

Creighton/K-State makes the list because it’s the Marcus Foster revenge game. Foster formerly played for K-State, but transferred to Creighton after his role with the Wildcats was diminished. There’s bad blood there.

There aren’t really any other heated rivalries on tap in the Round of 64, but it has to be hugely frustrating playing West Virginia and getting fouled every time down the court.

Odds a fan streaks the court during a game: 5/1

Is this still a thing? It feels like it’s becoming less of a thing. But maybe that’s just because TV networks don’t show it anymore. Can’t say that we’re hugely confident in this number.

Which coach will be ejected from a tournament game first

This list largely mirrors the odds on getting the first technical, but the more experienced coaches have longer odds. Guys like Cal and Coach K know that berating a ref and getting a tech might be worth it to fire your team up and/or get a future call in your favor. Getting tossed, though? That’s almost never in your team’s best interest.

Odds the coach is ejected for …

Which tournament coach will be fired first

The biggest names in the sport aren’t immune. Rick Pitino already proved that. After being implicated in the recruiting scandal in an ESPN story, Sean Miller isn’t out of the woods yet, despite being backed by the university. More details are going to come out eventually, and the team is hemorrhaging recruits. If he doesn’t leave voluntarily, Zona’s hand might be forced.

Auburn is also tied to the recruiting scandal, and Tom Izzo is dealing with his own issues at Michigan State.

Billy Kennedy and Bruce Weber are the most-likely performance-based terminations.

Odds the coach is fired as a result of …

As stated above, Miller’s situation in Arizona is untenable. No one wants to come play in Tucson anymore, whether the ESPN report is true or not. The program has a stink on it, and both the school and Miller probably need a fresh start.

Dan Hurley is one of the frontrunners for both the Pitt and UConn jobs that just opened up. It will be a pretty big surprise if he doesn’t take one of them.

Which tournament coach will need the first halftime shirt change

All the heat on Miller probably won’t help with this … 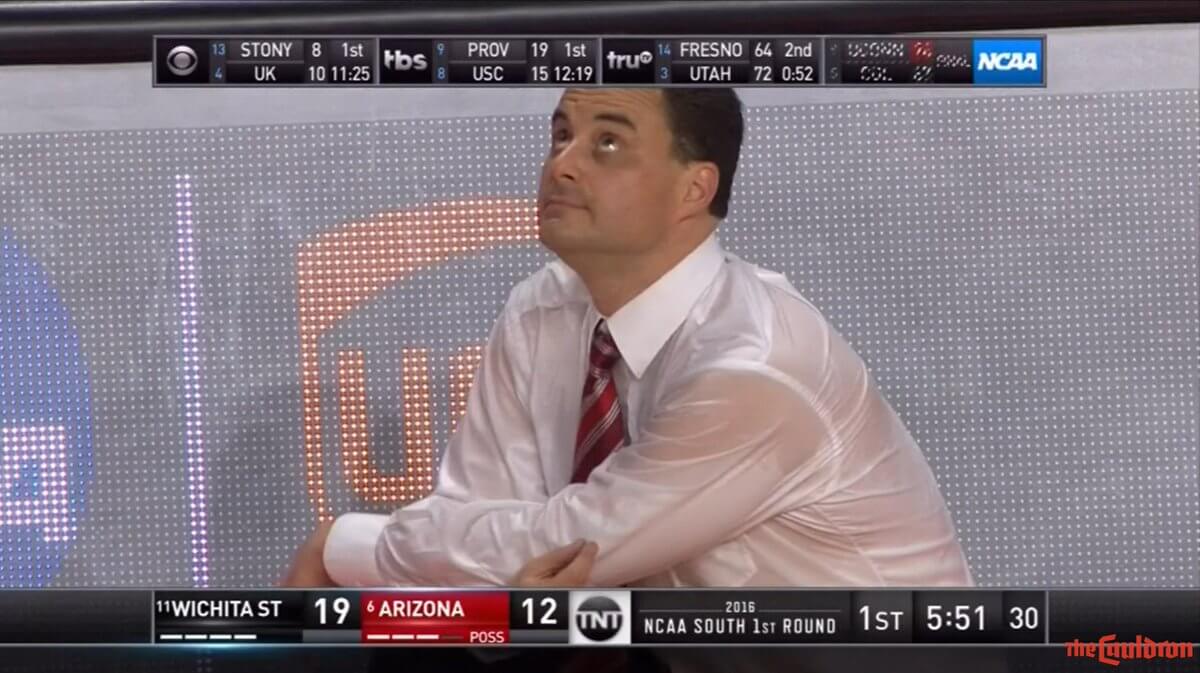 Which team will have the most fans ejected

Most people probably expected Duke to top this list, but where the Blue Devil fans are insufferably obnoxious, the ‘Eers fans are plain old rowdy (read: drunk). Apologies for the grainy video …

I think zero is the number here. Trump isn’t a huge sports guy, and hasn’t posted about collegiate basketball before, unless you count the UCLA players who were caught shoplifting in China.

UCLA or his alma mater, Penn. The latter is less likely because Penn is almost certain to lose in the first round to Kansas, and losing isn’t on-brand for the president.

Odds Trump will be asked for tournament predictions: 9/1

Obama tried to start a tradition of filling out brackets, and Trump didn’t stick with it. Also, Trump generally doesn’t engage with sports, only weighing in on the NFL anthem protests when they came to dominate the zeitgeist in 2017.

UNC declined last year, although they said it was because of scheduling. Suspicious, but qualifies. Nobody wants to be the first basketball team to visit the Trump White House.

Most-likely teams to refuse a trip to the White House

Not saying most of these blue-leaning schools have any real shot at winning, only that they would likely follow their insanely far-fetched title run with a firm “no” to POTUS.

Odds a tournament coach will make a pro-Trump statement: 10/1

The primary role of a collegiate basketball coach is to convince hyper-talented teenagers to attend their school, and teenagers aren’t exactly huge on the President. Also: college coaches that make over $1 million per year are considered non-profit executives and have had their taxes raised considerably by Donald Trump’s tax plan. It’s not likely that any of the big names are hugely pleased with him.

Odds a coach will make an anti-Trump statement: 3/1

Wouldn’t be the first basketball coach to do so, and could fetch some approval. Coach K has already made some pretty tepid criticisms of the president and received a lot of flak for it, but it’s not impossible that he’ll blame his loss in the Sweet 16 on Trump not having enough integrity, or something.

Odds a team or player protests the national anthem: 9/1

College basketball saw its share of anthem protests when they were at their height, but it’s died down. Plus NCAA basketball players aren’t usually on the court during the national anthem, and it would be bizarre to start that tradition now.