Monday’s don’t have to be all bad, especially when you’re making money from college basketball betting! This article is meant to do just that for you. After compiling the research, we’ve picked our best NCAAB bets of December 20, 2021 — and you’re getting them for free. Read on to see what betting advice we have.

Several top-25 teams are in action on Monday night and nearly all of them are being given massive spreads (including 38 points in this game) by the top online sportsbooks. Yes, 38 whopping points! That spread felt a little too steep for our liking so we’re betting the over/under of 145 points instead.

First things first, you might be thinking to yourself, “who the hell is Incarnate Word and where is that anyway?” Believe us, that was our immediate thought too. Here at MTS, we’ve been giving NCAA basketball betting advice for a long time so hearing this school’s name for the first time took us by a surprise. Welp, turns out they’re a Catholic-based school out of San Antonio. The Cards joined the Division I ranks in 2013 and have almost nothing to show for it, sans a CIT Tournament bid in 2015. This year is par for the course as they’re currently 2-9.

We sense Purdue will threaten to hit the century mark in points by themselves. Aside from one trip-up at Rutgers, this program has been as good as advertised so far. Per KenPom rankings, the Boilermakers have the third most-prolific offense in the whole nation. If they can score 90-plus points against the likes of UNC and Florida State, 100 points are very attainable against a “cupcake” like Incarnate Word.

For what it’s worth, the Cardinals should be able to get 50 or so points on their own to get the game into over territory. They’ve played one ranked team this year, Texas A&M, also on the road, and scored 62 points. So we’re confident that the over hits in this one!

With a three-point spread, this Oral Roberts and South Dakota is one of the few competitive games of the night, at least in the eyes of the best betting sites for NCAAB. Therefore, we felt obligated to offer up some advice on it.

Here’s what you need to know: the Coyotes are two completely-different teams when playing at home and when not. Inside its Sanford Coyote Sports Center, they are a perfect 6-0. But on the road? 0-4! They’ll need the home-court advantage because Oral Roberts is perhaps the best team they’ve faced all year long.

Our prediction is South Dakota’s home dominance ends on Monday. The Golden Eagles is a grizzled team and even went to the Sweet 16 earlier this year. They’ll be too much for a Coyotes team that lacks any statement performances this year, at home or not.

Another game with a lopsided spread (20.5 points), but another over/under opportunity in the Broncos-Fighting Irish matchup. Like our previous point total pick, we’re also liking the over here.

Here’s why: Western Michigan, when facing top-50-caliber competition like Notre Dame is, has a knack for being shredded on defense. The Broncos have two such games under their belt this young season — against Michigan State and Iowa. The Spartans scored 90 points, while the Hawkeyes were even better at 109 points. We believe Notre Dame can go off for a 90-whopper of its own.

As for the Broncos, watch out for guard Lamar Norman Jr. The junior is averaging 18.4 points per game in 2021 — third-most in the MAC. He should be able to do some damage, which will do wonders for the over.

Against The Spread: Northern Arizona Lumberjacks at Gonzaga Bulldogs

Alright, we had to bet one of these massive spreads, ok? There are not many other betting lines that jump out from a value standpoint. But here’s why Gonzaga should be able to cover the 35-point spread on Monday against Northern Arizona — they’re battle-tested now.

The ‘Zags get critiqued a lot for its playing schedule, but it’s had the toughest non-conference slate so far. In the last month alone, the Bulldogs have played four ranked teams (they went 2-2 in those games). After that gauntlet, they should be even sharper now. Unfortunately for the Lumberjacks, they are the first matchup since that tough stretch ended. Northern Arizona is at the “wrong place at the wrong time” with the Zags ready to finish the stretch right before Christmas break. Take Gonzaga to cover here!

How To Bet On NCAA Basketball?

So what’s it going to be — heeding our betting advice or fading it? We won’t be offended either way. But if you’re looking for a trusty sportsbook to make your bets on NCAA basketball, then pay attention to the bookmakers listed below. You’ll find every NCAAB betting line from now until March Madness there, plus big-money sign-up bonuses worth thousands of dollars in free play! Details are included in the underneath table! 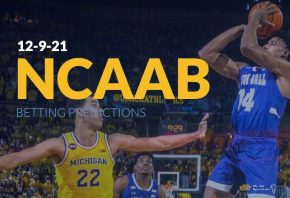