Despite being crushed by Baylor in the national championship game, the Gonzaga Bulldogs (+900) opened as the betting favorites to win next year’s NCAA men’s basketball tournament.

Let’s take a look at the early futures market, and as always, make sure to refer to our Ultimate March Madness Betting Strategy Guide if you need any tips or advice.

Due to the pandemic, the NCAA is allowing any player to transfer without sitting out a season. Given that big name stars can now pack up and leave one school for another at a moment’s notice, you can expect odds to fluctuate wildly this offseason with every new announcement.

For now, however, Gonzaga (+900) is considered the favorite. Coach Mark Few has averaged 28 wins per year over the past the 22 seasons, leading all active coaches with a 83.4% winning percentage. And the Bulldogs are expected to add two five-star prospects, Hunter Sallis and Chet Holmgren (the consensus No. 1 player in the Class of 2021) to a nucleus of Drew Timme, Andrew Nembhard and Anton Watson.

After making a Cinderella run to the Final Four, UCLA (+1100) is returning every meaningful player and adding five-star prospect Peyton Watson to its core. Villanova (+1000) is also among the handful of favorites after senior Collin Gillespie announced his return.

Michigan (+1100) is likely being overrated, however, with guard Franz Wagner expected to declare for the NBA Draft.

One storyline to monitor for 2022 is whether traditional powerhouse programs like Duke (+1600), Kansas (+1800), Kentucky (+1800) and North Carolina (+2500) will return to prominence after uncharacteristic down years. Coach K’s club didn’t make the tournament for the first time since 1995 and the John Calipari’s Wildcats actually finished with a losing record.

Tom Izzo’s Michigan State Spartans (+2500) were also bounced in the first round by the Bruins. Of all these teams, the Blue Devils are the best bet to bounce back with the expected addition of three five-star prospects from the Class of 2021.

In the past five Final Fours, just nine of the 100 starters have been true freshmen https://t.co/J71aecd4qc

Alabama looks like a sparkling value at +3000 (BetUS). After losing in the Sweet 16, the Crimson Tide is adding five-star point guard JD Davison and returning four of the top seven scorers from a team that won the SEC regular-season title and SEC Tournament.

Florida State (+2200 at BetOnline) looks like another strong buy considering the Seminoles are bringing in the nation’s second-ranked recruiting class to supplement a solid core that advanced to the Sweet 16 in the 2021 season. 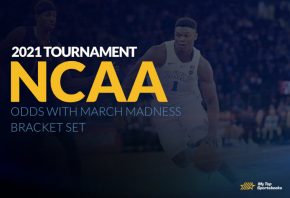