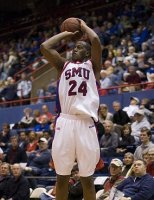 After a rough 2-3 start to the year, the Mustangs have re-entered the top-25 on the strength of a 10-2 conference record. SMU has won nine of its last 11 games, including a 68-57 road victory over the Tulsa Golden Hurricanes in their last outing.

“[My teammates] just kept telling me to shoot the ball,” said Moore. “I just had fun out there. My teammates did a good job of looking for me. We played a really great game.”

The win moved SMU within half a game of Tulsa for top spot in the American Conference. The team’s will meet again in Dallas in the last game of the regular season, potentially for the conference title.

One team that won’t be vying for that title is the Houston Cougars. At 1-9 in conference play, Houston is only ahead of 1-11 South Florida in the American.

There is a modicum of optimism surrounding the team right now, as they have won two of their last three games, including a 70-68 win over reigning tourney champs UConn.

The Cougars couldn’t keep that momentum going, though, dropping their most recent outing to Tulsa, 57-44. The team shot just 30-percent from the field and tied its lowest scoring output on the season.

Houston head coach Kelvin Sampson wasn’t entirely displeased with his team’s effort last time out. “We need all our parts working on the same night,” said Sampson. “You learn not to confuse shooting poorly with playing poorly.”

After picking up that big win over Tulsa on the weekend, Mustangs coach Larry Brown knows that his team can ill-afford to follow it up with a loss to one of the worst teams in the conference. Look for the Hall-of-Famer to have his team ready to go tonight and for the Mustangs (-10.5) to cover.