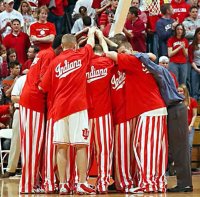 The Hawkeyes received 11 first-place votes in the latest AP Poll. But the way no. 1 teams are falling these days, they’re probably happy hanging out near the top. Since falling by a point to arch rival Iowa State in early December, Iowa has taken 12 of its last 13 games. They haven’t just been getting the job done against lesser opponents, either, posting a 4-3 record against top-25 teams, including an 83-70 road win over then-no.1 Michigan State.

The Hawkeyes had another double-digit road win last time out, dispatching Illinois 77-65 on the strength of 23 poitns from junior guard Peter Jok.

Jok (15.5 PPG) has more than doubled his scoring average from his sophomore season and has become the team’s key secondary scorer behind senior forward Jarrod Uthoff (18.4 PPG).

“I think you’re seeing a much more complete player,” Hawkeyes coach Fran McCaffery said of Jok to the Associated Press. “You’re watching a guy who, when he was young, made some mistakes. And he’s not doing that anymore.”

Jok and Uthoff have the Hawkeyes averaging 80.7 points per game, 28th-best in the nation.

But McCaffery will need his team’s defense to be on point tonight. Indiana is top-15 in the nation in scoring at 84.1 PPG and they’ve averaged nearly 89 points per game in their last three at home.

They dropped their last outing at Penn State (68-63), however, which was the second setback in the last four.

Tom Crean’s troops were forcing the issue against the Nittanies and wound up shooting just 37-percent from the floor.

“I thought a couple of times we tried to make some plays that weren’t there,” Crean said to the AP. Leading scorer Yogi Ferrell (17.2 points, 5.8 assists per game) had a rare off night, going 3 of 12 from the floor.

The Hoosiers are a different team at home, but they haven’t had much success against Iowa of late, going 4-9 ATS in the last 13 at home. Take the Hawkeyes to stay hot.