With just over three weeks until March Madness begins in a bubble in Indianapolis, college basketball’s two undefeated teams, Gonzaga (+270) and Baylor (+275), are the clear favorites while traditional blue blood programs such as Kentucky (+5000) and Duke (+7000) are scratching and clawing just for a berth in the tournament.

Shoot an airball with your last wager? Get tips on betting NCAA basketball here.

Gonzaga and Baylor are ballin’

The No. 1 ranked team in the nation, Gonzaga (+270) is crushing the WCC, winning their 13 intra-conference games by an average of 27.5 points. And while the Bulldogs have quality wins on their schedule (Iowa, Kansas, West Virginia, Virginia, Auburn), they haven’t played a ranked team since the calendar turned to 2001.

No. 2 Baylor (+275) should be more battle-tested heading into March, with victories over No. 9 Oklahoma, No. 12 Texas, No. 15 Texas Tech, No. 23 Kansas and Auburn over the past six weeks. The Bears have also looked dominant, winning 15 of their 17 games by double-digits.

Sometimes the best way to vanquish an undefeated team is to catch them on an off-shooting night, but the Baylor Bears almost never have one of those. https://t.co/Ed1T7nlF6l

Other teams in contention


Michigan (+600) defeated Ohio State (+1100) 92-87 on Sunday in just the third college basketball game between two top-five teams in the past three months (not to mention, two schools projected to be No. 1 seed in the upcoming tournament). In earning their first win in Columbus in seven years, the Wolverines are now 11-1 in the Big Ten, their best start in league play since 1976-77.

Luka Garza became the leading scorer in Hawkeyes history on Sunday, leading Iowa (+1400) over Penn State. Leading the nation in scoring at 24.7 points per game, Garza has his squad on a four-game winning streak heading into Thursday’s game against Michigan.

His 12 career 30-point games are the most by a Big Ten player over that span. pic.twitter.com/RpTFS6B182

Heavy favorites to win the national championship last season before the shutdown, No. 23 Kansas (+4000) has righted the ship recently, defeating No. 15 Texas Tech 67-61 on Saturday for a fifth-straight victory. Keep an eye on the Jayhawks this week to see how they perform against No. 12 Texas and No. 2 Baylor.

Oklahoma (+2800) also presents a nice value with an 8-1 record in their past nine games, including victories over No. 13 West Virginia, No. 12 Texas, and No. 23 Kansas. Playing a smart brand of basketball and limiting turnovers, the Sooners are now tied with Ohio State with five wins over Associated Press top-15 teams. 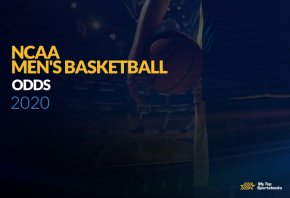