David Shaw is one of the hot names in the NFL head coaching carousel for this upcoming offseason, but before taking an interview he and his team will face the 100th edition of the Rose Bowl as Stanford take on the Michigan State, on January 1st at 5:00 PM ET. 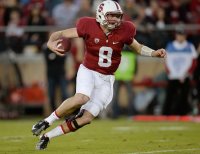 “No matter what I say, the rumors aren’t going to stop,” Shaw said. “It doesn’t bother me. Every good football program in the last 15 years, after two good years, the head coach is going to be rumored to go someplace else. I take it as a compliment.”

The Cardinal is 11-2 this season, and 7-6 against the spread; plus, the total has gone UNDER in 7 of Stanford’s last 8 games.

Michigan State coach Mark Dantonio hasn’t coached in the Rose Bowl since he was an assistant at Ohio State in 1984.

“It’s going to be a special moment when we walk out on that field,” Dantonio said. “When you sit down and write down your goals and think about the goals in whatever job that you take, or occupation, you’re going to have some different things that you want to try to accomplish. That was one of the things we were trying to accomplish.”

Stanford is a 6 point favorite for this edition of the Rose Bowl; the game total is at 42.5 points.  The Cardinal is 8-1 ATS in road games in games played on a grass field over the last 3 seasons.