The 2014 March Madness Final was almost impossible to predict, but the UConn Huskies and the Kentucky Wildcats are set to define who the best team in College Basketball is, this Monday at 9:15 PM ET at the AT&T Stadium. 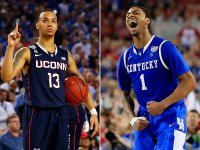 UConn not only advanced to the final, but they knocked out the 30 games winning streak the Florida Gators had before Saturday.

Kentucky advanced one again with late three-pointer shot by Aaron Harrison; the Wildcats eliminated the Wisconsin Badgers in what was a game for the ages.

“You can’t be scared to miss, and you want to be that guy that wants to take the big shots,” Aaron Harrison said. “Coach said he wanted me to take the shot, my teammates have confidence in me, and I just fed off that.”

The Wildcats open as 2.5 favorites in the March Madness Final odds and the game total was set at 134.5 points.