The Big East will be represented in the final four as Syracuse take on Marquette for a place in the last four, this Saturday at 4:30 PM ET. 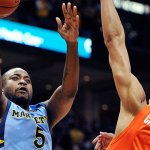 These two teams already met this season with a 74-71 win by the Golden Eagles. “I know about spacing,” Marquette Davante Gardner said Friday. “So they’ll change it up and try to lock me down.”

“I love playing against athletic guys,” Gardner went on. “Because they think they can just stop me. But I use my weight to push them around.”

Syracuse is -5 point favorites over Marquette as they beat Indiana in the sweet 16. This will be the last time the Orange will be in the Big East.

“Everybody in this business knows what they need to do,” coach Jim Boeheim said. “It’s a question of if you can execute it in the game. Indiana knew exactly what to do. Tom Crean has coached against me, he’s seen our defense, he knows. They knew what to do, it’s a question if they can do it.”

Marquette has covered the last five games they played against Syracuse.