March Madness is just days away, and despite some people’s complaints that the ‘one and done’ rule prevent the tournament from having massive stars, there are a few names you need to remember in order to be ready for the brackets.

Olapido could be the best player in college basketball at the moment; not only as a complete package, but with enough help surrounding him to carry the rest of the Hoosiers when teams are not going their way.

Victor is a junior guard that averages a little less than 14 points per game on 64 percent shooting, including 51 percent from 3-point range; he can rebound with the big guys and does the right thing when he has the ball on his hands.

Here’s the unusual thing for this guy; he can defend three positions: point guard, shooting guard and small forward, but also on the defensive end his energy is infectious.

Smart is a natural leader that will try to take the Cowboys to shock everybody in the bracket.

He’s a tremendous defender that obviously plays on both side of the ball. On defense, he can take any name out of the match, but also on offense, his strength might that he’s most physical guard in the nation

“But the Freshman of the Year should be Oklahoma State’s Marcus Smart, and he showed why in the Cowboys’ 76-70 win over No. 9 Kansas State Saturday”, recall NBC Sports, about his performance during the weekend. 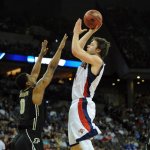 On his senior year, Dellavedova has brought his A game this season, averaging over 16 points a night, but also putting 6.4 assists a game.

Matthew’s best suit is when his team manages a fast break as he is explosive and almost impossible to defend.

When the Gaels are playing midcourt offense, Dellavedova is a threat every time he comes off the ball screen. He usually delivers the ball on target.

Michigan was on the top of AP poll a few weeks ago for the first time in 20 years, and most of the credit had to be with Trey Burke, a sophomore who’s fearless in the clutch and usually ask for the ball in crunch time.

Burke averages 18.9 points and 6.9 assists per game; he makes Michigan if not contenders, a team to fear at some, and the way he plays alongside with Tim Hardaway Jr., will take the Wolverines a long way in the tournament.

Plumlee looks to make his senior season, the best of all averaging 17.1 points per game, and 10 rebounds.

As a forward Plumlee takes his defenders to the high post, and that’s where he makes the most of his game. He has quick feet in order to turn around and find the rim with en easy move.

He also can run the floor, and can score from the low post, but most of his game as mentioned, is on the high post.