The big time favorites in the Big 12 tournament, Kansas City Jayhawks, will try to win the tourney for the eighth time in a row as they face the Baylor Bears in the semifinal round, this Friday 7:30 PM ET. 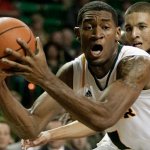 The Jayhawks have won the mini tournament eight of the 15 years since the inception of the same. Kansas has defeated 10 of its 11 rivals in Big 12 tournament play. However, coach Bills Self is a little worry about his rival. “They’re so talented, it’s a joke,” Kansas coach Self said of the Bears following Thursday’s win. “It’ll be an interesting next 24 hours to get ready.”

Kansas beat the Aggies 83-66 in a game where it was never close. “They demand so much help with Thomas Robinson and Jeff Withey that we left some guys open on the perimeter, and when they make 10 3s and Robinson hits two 3s, they’re a very difficult team to beat for anybody,” Texas A&M coach Billy Kennedy said about Kansas.

Baylor smashed the Kansas State Wildcats with Perry Jones III scoring a tremendous 31 points. “I guess I was just in the zone today,” said Jones, who also had 11 rebounds for his eighth double-double in a season that’s been a bit of a disappointment. “Just being aggressive and more assertive.”

The Bears already lost to Kansas twice this season; both games by double digits difference in the final score. Don’t fool yourself, just pick Kansas to win it.