A bad blood game hits Spartan Stadium as the Michigan State Spartans host the Michigan Wolverines this Saturday at 3:30 PM ET, in one of the most exciting games in College Football week 10. 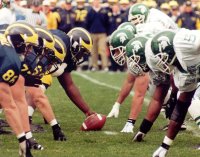 The Spartans are 22nd, and the Wolverines are 21st in the BCS standings; both have just one loss in the season and can’t afford to have another one.

Michigan State beat Illinois 42-3 last week with 208 and 3 TDs from QB Connor Cook. “We have our goals, just like everybody else,” Spartans coach Mark Dantonio said. “And among our goals is to be in that championship game and then to win it.”

“It’s certainly disappointing when one of your kids makes a very poor decision,” Michigan coach Brady Hoke said in a statement. “A.J. realizes he has let a lot of people down, including himself. As families do, we will help A.J. as he learns a valuable lesson from this.”

The NCAAF betting odds have the Spartans as 6 point favorites for this matchup, and the game total was set at 46 points.

Michigan State is 3-10 ATS in its last 13 games at home, but manhandled the Wolverines the last time they visit Spartans stadium in 2011.

“They bullied us,” Michigan offensive tackle Taylor Lewan said on Monday. “That’s tough for me to admit because I don’t like getting bullied.”