For months it has been apparent that the college football season has one major theme. Can anyone derail Alabama? Georgia pushed the Dogs in the SEC Title game, but somehow, someway, Alabama escaped with a victory, and the top seed in the playoff.

Interestingly, since the last time we looked at the odds, the Tide have actually become a smaller favorite by a slim margin, and Clemson’s price has dropped. Notre Dame wasn’t getting a ton of respect three weeks ago, and nothing has changed in that regard. Oklahoma’s price has been sliced dramatically, but sportsbooks still consider them a fringe contender.

The Tide were on the ropes in the SEC Title Game. They trailed, and likely Heisman Trophy winner Tua Tagovailoa had been knocked out. The analytics community has liked Georgia all year long, and it appeared likely that the Dogs were going to crash the playoff party. Not so much. Back-up quarterback Jalen Hurts rallied the troops, UGA made a major error or two, and Alabama remains unbeaten and perhaps untouchable. 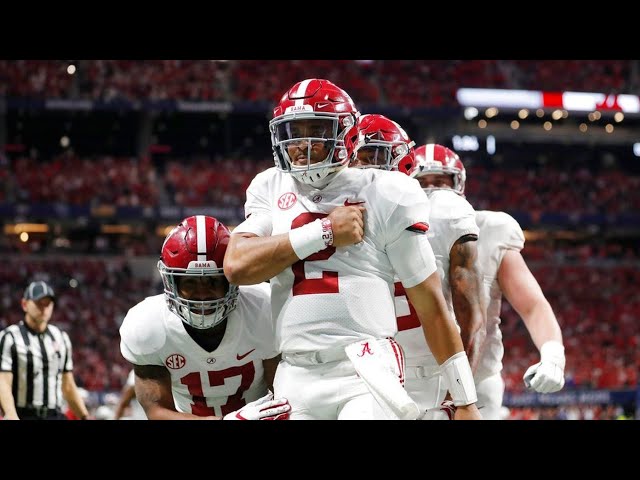 With Tua expected back from his ankle injury, the Tide remain dominant. On both sides of the ball they are impressive, ranking among the nation’s best teams. However, if Tagovailoa isn’t fully healthy, or somebody else plays a Georgia-esque three quarters, perhaps the Tide can be vulnerable. They could/should have lost in the SEC Title Game, so why not again? Their -220 price gives the Crimson Tide an implied probability of almost 69-percent to win the title. If you think their chances are closer to 50 or 60-percent, there may be value elsewhere.

While the public has felt throughout the year that Alabama is the top dog, and everybody else lines up behind them, statisticians have generally looked at the Tide as more of a 1A option with Clemson as 1B.

Since Trevor Lawrence has taken over at quarterback, the Clemson offense has exploded. Many think he will be the top pick in the draft when eligible, and comparisons are gaudy.

Any major conference team that scores 45 points a game and allows less than two touchdowns must be pretty good. So long as they beat Notre Dame, and they’re favored to, another clash with ‘Bama in the title game would be must watch television.

It is an honor just to be nominated.

The Fighting Irish are unbeaten, but their only high quality win came to kickoff the season against Michigan. Notre Dame is deserving of a playoff berth, but the idea of a team that is not as good as Alabama or Clemson on either side of the ball beating both to win the title is far fetched.

Oklahoma is lucky to even be in the bracket. Their high flying offense is incredible, but the defense yields more than 32 points a game. Outscoring Kansas and Oklahoma State is one thing, Clemson and Alabama are totally different.

Clemson offered value when we looked at this last month, and while their price has gone down, the Tigers still present opportunity. They have a dynamic and healthy signal caller, a history of success in big games, and have been overshadowed all season, but nearly as dominant as Alabama. Getting nearly 3/1 on a clear cut second choice with a layup of an opening playoff game is not insignificant.