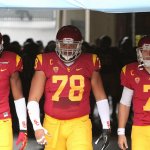 While both USC and Utah are top 25 teams, neither is in serious consideration for the College Football Playoff. With two losses, USC is permanently out of the running. Utah has just one loss on the season, but it came at home to a very mediocre Washington State squad; though this is the first year for the College Football Playoff, it’s safe to say that losses like that look really bad on your CFP resume.

After a tough loss to Arizona State on a Hail Mary, the Trojans have won two games in a row, including a 56-28 dismantling of the Colorado Buffaloes last weekend in which they covered the spread as 19-point favorites. The USC coaches are excited about Junior QB Cody Kessler, who has thrown for 1,884 yards, 18 TDs and 1 INT this season.

“We coach this guy harder than any other guy on our team, and he accepts it, and he comes to work every day with the mindset to get better,” head coach Steve Sarkisian said of Kessler, the Pac-12 player of the week.

“When you are a team that believes in running the football, you have to make defenses pay for loading the box, you have to have the ability to throw the ball down the field,” Sarkisian added. “When you have those two things going for you, then life is good.”

Utah is also riding a two-game win streak after beating UCLA (30-28) and Oregon State (29-23) on the road. The Utes and Beavers battled to a 16-16 tie through 60 minutes last weekend and the Utes needed two overtimes to get the win. The Utes’ offense posted big numbers in the first two weeks of the season against smaller programs, but has had its struggles lately. Travis Wilson, the team’s starting QB, went just two for five against UCLA before being replaced by backup Kendall Thompson. Thompson led the Utes to a win, earning himself a start against Oregon State the next week. But Thompson couldn’t hold onto the job, going four of eight for 17 yards and a pick before giving way to Wilson at halftime. Though the Utes won that game, Wilson’s stat line wasn’t much better (five of ten for 45 yards). Coach Kyle Whittingham announced that Wilson would start under center against USC but, if he struggles early, don’t be surprised if the revolving door continues to spin.

This matchup is listed as pick’em game and the game total is at 52.2. If you’re looking for a trend: since 2011, the home team has won every game in the series.

(Photo credit: NeonTommy (flickr) [https://creativecommons.org/licenses/by/2.0/] via Creative Commons. Photo has been cropped from its original.)