With two losses on their resume (USC and Notre Dame), including a heartbreaker last week in South Bend, the Stanford Cardinal will try to bounce back when hosting the Washington State Cougars this Thursday at 9 PM ET at Stanford Stadium. 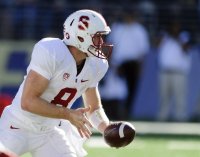 With two losses on their resume (USC and Notre Dame), including a 17-14 heartbreaker last week in South Bend, the Stanford Cardinal will try to bounce back when hosting the Washington State Cougars this Thursday at 9 PM ET at Stanford Stadium.

Stanford’s loss to the Irish on the last play of the game took the Cardinal out of the running for the inaugural four-team College Football Playoff. Though many top teams lost last weekend, Stanford could not afford a second defeat, and now their goal is to look for a good bowl bid.

“We see where the conference is right now. Who knows where we’ll be next week? Who knows where we’ll be two weeks after that? It’s crazy,” Stanford head coach David Shaw said. “We’ve been saying it since the beginning, all of us coaches felt it, we talked about it in spring — this conference is crazy right now. Everybody’s good. It’s going to be a wild finish to this season. We’re right in the thick of it with everybody else.”

The Cardinal’s problems this year have come on offense, particularly in the red zone. Though Stanford is averaging 24.8 points per game, the Cardinal have scored a combined 24 points in their two losses.

The Cougars are a hard team to get a read on. Though WSU is just 2-4 on the season, the Cougars posted an impressive win over Utah – a top 25 team – and suffered a narrow loss to the (then second ranked) Oregon Ducks. The Cougars’ offense has looked unstoppable at times. In a narrow 60-59 loss last week to Cal (yes, that score is correct), WSU quarterback Connor Halliday threw for an FBS record 734 yards, including six touchdowns.

But Halliday and the Cougars will have a tough time repeating anything similar against Stanford, which has one of the top defenses in the country. Stanford has dominated the series lately, beating Washington State in eight of the last ten meetings, including a 55-17 blowout last season.

The Cardinal are 17-point favorites, and the game total sits at 55.5 points.