Northern Illinois has a fair Heisman Trophy candidate in QB Jordan Lynch, and he will try to lead the Huskies to their 13th win in a row as they face the Bowling Green Falcons, this Friday at 8 PM ET at Ford Field in the Mid-American Conference championship. 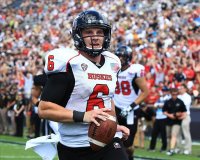 The college football odds for this game have the Northern Illinois as four point favorites to win the MAC championship, and the game total is at 58 points.

“Jordan Lynch is the best player in college football, and that’s no disrespect to anyone else,” said Western Michigan coach P.J. Fleck. “The reason is he makes every single guy around him better. He is what Northern Illinois is about. … And with all the pressure, he continues to perform.”

Lynch is second in the college football with 3,570 rushing yards and 39 touchdowns on the ground; he has running back numbers playing as a quarterback.  He’s nearly unstoppable. “We’re 12-0 now, and we want to be 13-0,” Lynch said. “Our next goal is going 13-0.”

Bowling Green is 9-4 this season, and they are in the MAC championship game for the first time since 2003.  Their defense is 5th in points against with 13.8 allowed every week, but I’m not sure they have faced something similar of what they are about to see on Friday.