Texas A&M has no word on whether Jonny Manziel will play in the opening game or not against Rice, and the college football world waits for a response from the Athletic Program, to see what the final decision will be. 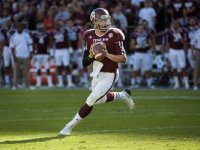 “We’re not discussing that,” coach Kevin Sumlin said. “I thought we went over that right from the beginning.”

If the Aggies play Manziel and if he is found ‘guilty’ of receiving money for signing a bunch of items, then the whole program could be in danger.

“I know he likes to play football,” Sumlin said. “I think the structure that he has had since Aug. 4 has been nothing but helpful.”

If Manziel doesn’t play, the Aggies will use either junior Matt Joeckel or freshman Kenny Hill at the quarterback position.

“We’ve got a really solid offensive line which takes a little bit of the pressure off Matt and Kenny,” Sumlin said. “When Johnny’s taking snaps, when he’s in there he’s really trying to help the perimeter guys. Our offensive line gives us an opportunity to rotate those quarterbacks and have them be successful.”

There are no lines for this game; the presence of Johnny Football on the field could be worth up to seven points of more against Rice this weekend.