Florida and LSU will meet this Saturday in the best game of College Football week 7, at 3:30 PM ET at Tiger Stadium. 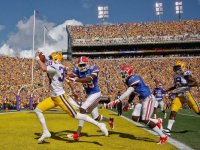 The LSU undefeated run was ended two weeks ago by Georgia, but they managed to bounce back by beating Mississippi State 59-26 last week.

Tigers QB Zach Mettenberger is playing in an outstanding fashion with 1738 passing yards recorded, with 15 touchdowns and just two interceptions.

“Zach is playing just like we need him to play at home or on the road,” LSU coach Les Miles said. “He is the leader. He is in charge of the communication. Zach is one of those guys on the field who gives you advantages not just with his arm, but with his mind.”

Florida QB Tyler Murphy has 530 yards, 5 TDs and just 1 interception since he took over the starting job three weeks ago.  Florida is 4-1 this season.

Florida leads the all-time series 31-25-3, but these two programs have split the last 10 meetings.