While Week 0 of the college football season is in the books, the real action starts this Saturday when two National Championship contenders, Georgia and Clemson, clash in Charlotte.

After already making our picks for the national title, the Heisman Trophy and the 4-Team Playoff, today we’ll look at regular season win totals for some of the biggest programs in the NCAA. Be sure to check out our tips for betting on college football games, and head to BetUS, BetOnline, Bovada to see win totals for every school in college football.

When Jim Harbaugh arrived in 2015, Michigan was expected to contend for the national championship, or at the very least, beat their rivals in Ohio State. Expectations for the Wolverines are significantly lower now with a 7.5 win total (-130). But given that Harbaugh has won more than eight games in five of his six years, with the exception being last year’s miserable COVID-shortened season, there’s value in the OVER here.

Michigan will return 17 starters and has a top-15 recruiting class. With a new defensive coordinator and plenty of talent on offense, there’s no reason they shouldn’t win two of their four games against Washington, Wisconsin, Nebraska and Indiana. And, if they don’t, it’s time to end the Harbaugh era in Ann Arbor.

Michigan has quite the schedule on their hands…

Is this Jim Harbaugh's year? pic.twitter.com/dfk2Cu6nxw

With a new head coach in Steve Sarkisian and questions at quarterback, offensive line and wide receiver, the Longhorns will not contend in the Big 12 this season. But winning eight regular-season games looks like the worst-case scenario.

Sarkisian will have fun scheming up plays for AP Pre-Season All American running back Bijan Robinson and their defense should be able to hold the fort after bringing in a bunch of transfers. We like Texas to win eight games (-115) on the nose.

North Carolina enters the season ranked in the AP top 10 for the first time since 1997, with a win total of 9.5 games. Mack Brown turned the Tar Heels around quickly and Sam Howell is expected to be among the first quarterbacks taken in the 2022 NFL Draft. Still, lots of skill position talent departed Chapel Hill, including running backs Javonte Williams and Michael Carter and speedy receiver Dyami Brown.

While they’ll avoid Clemson on their ACC schedule, Notre Dame and Miami will provide stiff challenges. It’s hard to find other guaranteed losses on North Carolina’s schedule, but a double-digit win season will prove just out of reach. 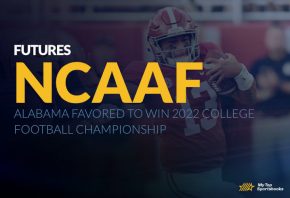