The AFC East is not a division that have given us a lot of surprises in the last decade as the New England Patriots have won the zone nine of the last eleven years, and seems to be the big favorites to do it again. 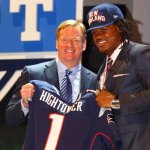 New England Patriots -450 To Win The Division: The loss in the Super Bowl gave the Patriots not only a bad taste on their mouths, but a tremendous mindset that they need to be back to the big game as soon as possible. The Pats signed WR Brandon Lloyd who knows perfectly the Josh McDaniels system, plus Colts running back Joseph Addai to help Brady on the offensive side.

However, their most important improvements came on the defensive side as they drafted two impressive rookies in the first round: defensive end Chandler Jones, and inside linebacker Dont’a Hightower.

New York Jets +600 To Win The Division: the Jets have been on the headlines all offseason, but it wasn’t because of the key arrivals that will help the team in numerous positions, but because of the arrival of one guy: Tim Tebow.

Tebow won’t help with the passing game, but it will give Mark Sanchez a huge competition; this could go either way, good or bad… I’m going with bad.

Buffalo Bills +700 To Win the Division: the Bills had a breakthrough year at the beginning of last season, but they were unable to keep it up for the entire year.

Buffalo knows if they want to win the AFC East they need to beat the Patriots and to beat the Patriots you need to make Tom Brady uncomfortable; that’s why they signed DE Mario Williams, (six years, $96 million, $50 million guaranteed), and “stole” DE Mark Anderson from New England to improve what now looks as a really scary defensive line.

Miami Dolphins +1000 To Win The Division: The Dolphins are far away from being the best bet in this division; they let go Brandon Marshall to bring Chad Ochocinco, but their main problem is they have no idea who will be their starting quarterback at the beginning of the year. Matt Moore, David Garrard and Ryan Tannehill will fight for the spot.