The race for NFL MVP appears to have shifted to new guard vs old guard. In one corner, the young future of the league, Patrick Mahomes and Todd Gurley, who are leading the two best teams and are the huge favorites. On the flip side, Drew Brees, Aaron Rodgers, Tom Brady, and Cam Newton are still great and provide significant value at much longer odds.

Just over a month ago, we looked at the odds. At that point, Mahomes had just become the chalk, while Gurley wasn’t even on the board. Meanwhile, the odds on the veteran signal callers are trending higher.

It is important to remember that there is more than half a season remaining. In addition to injuries, narratives can change very quickly. Let’s look at the odds, and then break-down some legitimate betting options.

Is it a two-man race?

An even-money price on Mahomes makes him a 50/50 shot to take the hardware, while 3/1 for Gurley is equivalent to a 33% chance. If those odds are to be believed, the rest of the league has less than a one-in-five shot of becoming MVP. While that number is laughable, there is no diminishing what Mahomes and Gurley have done.

Kansas City’s first-year starting quarterback is making the league look silly. He has 26 touchdown passes, two running scores, and only six interceptions. He is averaging more than 315 yards through the air per game and has connected on a pass of 35 yards or longer in every contest this year. Mahomes has a 65.6 completion percentage and is averaging close to nine yards per attempt.

There are no knocks on his candidacy outside of the fact the season isn’t even halfway over. 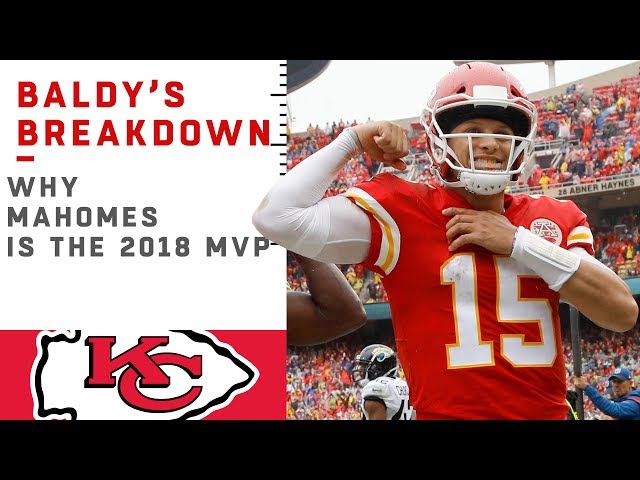 When it comes to Gurley, the numbers don’t lie. He has 15 touchdowns in eight games, and even passed one up on Sunday. The Rams running back has totalled 1,151 yards on the season, more than 140 per game. He is averaging 4.7 yards per carry, and 11.3 per reception. Despite a talented group of wide receivers, and an MVP candidate at QB, Gurley is the best offensive player on what appears to be the best team.

What About the Former MVPs?

Over the last eight years, Rodgers and Brady have each won two MVP awards while Newton has taken one. Incredibly, Brees has never been named league MVP, though he has been runner up for MVP on three occasions and elected to the Pro Bowl 11 times.

It is fairly obvious that if the Packers, Patriots, Panthers, or Saints achieve greatness this year, their quarterback will get a great deal of MVP consideration.

Rodgers and Brady meet this week on Sunday Night Football. If the Packers lose, they’ll have four losses in a very competitive NFC North. If the Patriots lose, they’ll likely be two full games behind KC in the race for home-field advantage in the AFC.

The Saints and Panthers play twice over the final three weeks of the season, and with New Orleans currently at 6-1 and Carolina at 5-2, not just the division, but a playoff bye, and possibly an MVP vote or two could be on the line.

Among this group of four, it seems pretty likely that one or two will end up being 5/1 or less come mid-December. Someone will compete with the young guns. The question is who?

Mahomes need only keep up his pace to win. However, the pace he has set is historically great and will be difficult to maintain. Gurley is going to seed some credit to Goff. Having a team with two MVP candidates is very conducive to winning games but much less conducive to winning individual trophies.

The analytics community has been high on New Orleans all season. If the MVP race is close, Brees will get some votes based on what he has accomplished during his career without winning the award.

Brees is the pick, though if you think the Patriots can go 14-2 or 13-3, or like Carolina to upend the Saints at the end of the season, or think Rodgers can continue to stand on his head and will the Packers to victory every week, then each veteran QB has value.