The Dallas Cowboys haven’t won a Conference Championship in over 15 seasons despite heading into season after season with some of the top pound for pound talent in the league.

The Cowboys are beginning to reek of underachievement. 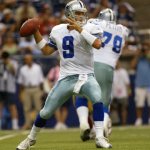 Tony Romo remains a decent statistical quarterback but only played in six games last season. Despite that, the Cowboys passing was still a top ten sportsbook pick in 2010.

Their rushing game was not terrible, but where they really got roasted was their pass defense. It was ranked 26th overall in the league and as of the writing of this article, they don’t possess a safety that has even started a football game in the NFL.

To their credit, at least they acknowledge their weaknesses and went aggressively after Oakland Cornerback Nnamdi Asomugha but lost out to Philly in the bidding war.

In 2011, a healthy Romo might lead you to believe that the Cowboys should get off on the right foot this season, but keep in mind how many football games Dallas lost out of the gates last year…WITH Romo at the helm. They were 1 – 4 during the game against the Giants that ended Romo’s season.

So now they have no pass defense, a rusty quarterback coming off a broken clavicle and haven’t made any significant moves to improve their most glaring weakness.

No thanks, a LOT needs to happen in the next month for me to even take a sniff at a Cowboys championship wager.

In fact, that number would have to double during the preseason for me to even consider a “what the hell” bet on Dallas, and that would only be because the NFC East is generally a bizzarro world division every single season, and you can never be surprised with who emerges on the top of the heap.