Coming off the season they had, the Green Bay Packers would normally be considered the hands down favorite to repeat as Super Bowl champs in 2011. Not so fast.

With the new collective bargaining agreement altering the landscape of NFL rosters, the Pack have slipped to second place in terms of Odds to win the Super Bowl.

Super Bowl MVP Aaron Rodgers will certainly remain at the helm for the Cheeseheads, but their biggest opposition lies in the competition of the NFC North. 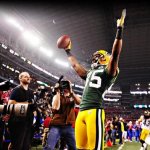 Keep in mind that the Packers rolled into the playoffs in 2010 as a wild card team, only going only 10 – 6 during the regular season, with a 4 – 2 division record. A solid outing, but not amazing stats. They lacked a stellar rush game and rush defense and are now juggling the salary cap to solidify depth at linebacker.

The plus side is that they were very young last season, and with another year under their belts will be able to use that experience to overcome some shortcomings in personnel. The problem may lie in their division rivals.

The Philadelphia Eagles have put their money into defense, big time, and the Minnesota Vikings have put strides into taking their 26th ranked passing offense in the past with the signing of Donovan McNabb.

The Pack are still a solid bet, but at +650 it’s not a very profitable risk based on the reality of what they’re surrounded with. Pack fans tread lightly on this early, the season hasn’t started and their Super Bowl winning line has much more to do with what they put down in the playoffs last year than what they’re faced with in 2011.