Once again, the New England Patriots open the Pre-Season leading the pack as Super Bowl favorites.

Heading into 2011, the Patriots have added two premier players to a squad that had the best regular season in the NFL in 2010 while possessing the leagues youngest defense, worst defensive 3rd down conversion rate and without any semblance of a pass rush.

For 2011 they will be with the services of the very talented – albeit underutilized – wide receiver Chad Ocho Cinco, and former defensive superstar Albert Haynesworth. 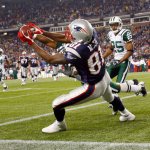 For the last decade the Pats have an uncanny ability to turn nobodies into Pro Bowlers and resurrect downhill careers. Ocho Cinco will be joining a receiving core that without Randy moss was the best in the NFL in 2011, and help to bolster the standout talents of Wes Welker, Aaron Hernandez and Tom Brady.

An unhappy Ocho Cinco spent last season on a team that won only three games all season and put up barely 20 points per game. His addition may not be a carbon copy replacement for Randy Moss, but for a team that needed no boost on offense, Ocho Cinco has an opportunity to put up some serious numbers in 2011.

Defensively, the Patriots pass rush was a black eye on their stellar season. With an overachieving defensive secondary, the Patriots struggled to get teams off the field in third down situations. The potential of a healthy and in shape Albert Haynesworth is a terrifying proposition for opponents. With this young defense a year older, and the talent to get pressure on opposing quarterbacks with a player who has shown the ability to frustrate offensive linemen with the tenacity of Haynesworth, The Patriots have added a dimension to the defense that New England has lacked for the last few seasons.

Couple these additions with the fact that the Pats went 14 – 2 last year and Tom Brady played one of the best seasons for a quarterback…ever…the Pats are a solid bet for a Super bowl win in 2011.