Drew Brees and the Saints know they still can have a bye week in the postseason if they win all
their games, and San Francisco losses one of theirs next two; that’s why they will try to make a
statement against the Atlanta Falcons, this Monday night in a NFC South showdown. 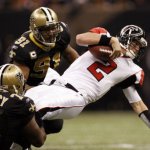 The NFL Odds have the Saints -7 points favorites.

Falcons and Saints battled in week 10 with a 26-23 win by New Orleans in overtime. It all came
to a play where the Falcons were stopped in their own field in a four down situation.
“We control what we can control,” Falcons coach Mike Smith said. “It’s obvious our guys
are familiar with the scenarios we are in. I know our guys are aware of it. We’re not going to
change our preparation, how we prepare. We try to be as steady as we can and just continue
to move forward as we have all season”.

Brees had 322 yards and two touchdowns in the first meeting against the Falcons; he
commands the best passing offense in the league and is 305 yards shy of breaking the 27 years
old Dan Marino’s record for most passing yards in a season.
“I’m as comfortable now in this offense as I’ve ever been,” Brees said. “I’m aware that we’re
close. I just know if we keep doing what we’re doing all of that stuff will take care of itself.”

The Saints are an unstoppable force right now; they are peeking at the right moment, and in a
Monday night at home, it will be difficult to slow them down. If you have a team that performs
better than the Saints do on national television, I dare you to tell me.

However, I do expect a close game.

My Pick: Saints will win, but the Falcons will cover.