The New England Patriots are two games away from their fourth Super Bowl ring in 11 years, and their
fifth appearance in the big dance; only the Baltimore Ravens and a NFC team are in the way. Brady and
the Pats take on the Ravens this Sunday at 3 PM ET.

The NFL Lines have the Patriots -7.5 over the Ravens. 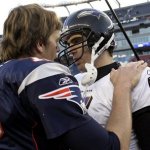 These 2011 New England Patriots are a difficult matchup for the Ravens, especially in the middle of
the field. The Ravens linebackers are strong, but not fast enough to slow down Rob Gronkoswki and/
or Aaron Hernandez. Ray Lewis seems to be on his last legs, and Jameel McClain is not the fastest
linebacker in the world.

The good thing about this game for Baltimore is that their offense is underrated and is constantly
under-look because their defense is so powerful. “We’ve gone (to Foxborough) and played before,” said
Baltimore’s Joe Flacco.

Flacco might not be the best quarterback out there, but he can move the ball just enough to beat a New
England’s defense that’s horrible against the pass. Of course, for the Patriots, their first task is to stop
Ray Rice; if they don’t do this, they will be out of the game fast.

Brady hadn’t been this close to a Super Bowl ring since the 2007 season when they entered the big
dance as the undefeated and big favorites against the NY Giants; he lost that game, but if he wins over
Baltimore this weekend he might face them again at Indianapolis, or he might face his childhood team,
the 49ers.

Enjoy the Championship weekend because it will be the last one with multiple games in a long time.