The NY Giants and the San Francisco 49ers clash this Sunday at Candlestick Park for a Super Bowl trip, in
a classic matchup of teams that dominated in the 80’s.

The NFL Odds have the San Francisco 49ers -2.5 over the NY Giants. 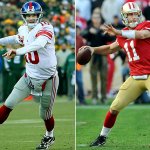 New York is the hottest team of the remaining four, but San Francisco has been consistent all season, and they also have home field advantage; that’s why is so hard to pick this game. “I think it probably surprised a lot of people that the Giants and the 49ers are in the NFC championship game,” 49ers first-year coach Jim Harbaugh said.

The Giants defense is playing outstanding with a tremendous pass rush unit and good coverage that
could force turnovers. Also, on offense, Eli Manning is playing like a superstar and his receivers, Hakeen Nicks and Victor Cruz are gaining lots yards after catch.

San Francisco beat the New York in week 10, but the feeling is this Giants team is healthier and better
at this point. “We know what to expect with them,” said Manning, who missed part of Wednesday’s
workout with a stomach bug. “They’re a very sound team. They’re very good. They have good players.
They play with great energy.”

The Giants are also 4-0 in the NFC championship games.
“We don’t have to go nowhere. We can just go out back, go out back and throw the football around,”
Davis said. “The opponents, they come to us. And that’s always good, having home-field advantage, and
having the team come to you.”

To me the Giants are rolling and it is hard to stop them; however, I trust 49ers’s coach Jim Harbaugh will
have something prepare for them. I have this one as a close game as it could get.