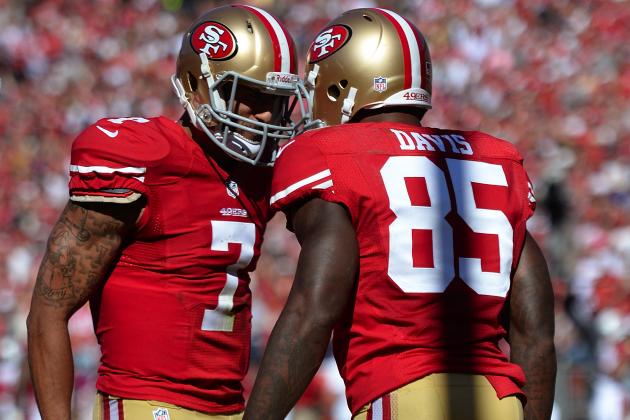 The Niners will face greater difficulties this year.  Although they signed franchise quarterback Colin Kaepernick to a long-term deal, they lost numerous starters to free agency, injury and possibly suspension.

Most of the hits are on defense.  Word recently came out that starting nose guard Glenn Dorsey is out for the season.  All-Pro linebacker NaVorro Bowman is still recovering from a torn ACL and MCL he suffered in the NFC Championship, and it’s unknown if he will play this season.  Sack-master Aldon Smith also faces a substantial suspension.

Fortunately, the Niners have built tremendous depth to complement their talent.  Second-year player Quinton Dial and former starter Ian Williams will fill in at nose guard and be flanked by All-Pro Justin Smith and veteran Ray McDonald.

Patrick Willis anchors the linebacker position and will help compensate for the loss of Bowman.  Rookie Chris Borland will likely start in place of Bowman.  At outside linebacker, if Smith is suspended, the young and capable Corey Lemonier will start in his place opposite Ahmad Brooks.

The Niners lost three starters in the secondary.  Safety Eric Reid enters his second year and is joined by new signee Antoine Bethea, who replaces the hard-hitting Donte Whitner.  Cornerback remains a huge question mark.  Tramaine Brock played well at nickel last season and will be battling for a starting position along with Chris Culliver, Chris Cook and Perrish Cox.

San Francisco hopes to be much better on offense.  They will again have one of the top offensive lines in the NFL.

The Niners are also stacked at running back, even despite the loss of back-up Kendall Hunter to a season-ending injury.  Frank Gore will get most of the carries, but they also drafted Ohio State back Carlos Hyde, who was arguably the best running back in the draft.

Coach Jim Harbaugh will need the offense to carry a bigger load this year.  Kaepernick’s continued improvement is imperative for their success.

The 49ers currently stand at 15-2 to win the 2015 Super Bowl and 9-2 to win the NFC.  Being in the vaunted NFC West, the Niners will have one of the tougher schedules in the NFL (.563 opponents’ win percentage).