A rivalry game between the Ravens and the Bengals is always a hard-hitting matchup, but
when a playoff spot in on the line, things could get even uglier. Baltimore and Cincinnati clash
this Sunday at Paul Brown Stadium.

The Ravens are -1.5 favorites over the Bengals in the NFL Lines. 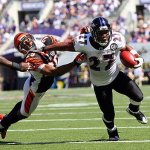 What’s at stake? Well, for the Bengals the opportunity to have the last wild card playoffs spot;
for the Ravens, a win will clinch the second seed in the AFC, meaning a bye week, but also, a
loss from the Patriots will give them the first seed in the conference and home field advantage
through out the playoffs.
“Playing at home can help us get closer to the prize,” middle linebacker Ray Lewis
said. “That’s the real incentive right now. We’re in the dance. We’ll go where we have to go.
But playing at (home) for any game would be a good, good thing.”

The Ravens are unbeaten at home this season, but 3-4 away from their building; that’s this
game means a lot.

The Bengals, on the other hand, haven’t beaten a single big team this year. They lost the two
games against the Steelers, and lost the first one against the Ravens; if they want to be in the
playoffs they need this win.
“They’ve done a really good job of running the football and obviously making bigger plays in
the run game,” Bengals coach Marvin Lewis said at his news conference on Wednesday.

Stat of the week: Cincinnati is 7-18 ATS at home revenging loss, where the opponent scored
28+ points in the previous meeting.