The NFL is a while away from starting, but you NFL betting fans can’t tell me you haven’t checked week one lines trying to figure out which are the best bets on the table. Here are two… 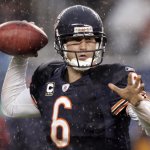 The Bears are one of the teams I expect to be a pleasant surprise in the 2012 season; they were playing at an extraordinarily high level last year, but they failed to get to the postseason when their two offensive stars got injured.

With Brandon Marshall now reunited with Jay Cutler in Chicago, the Bears have a playmaker that will have a clear understanding of the routes his quarterbacks expect him to run.

Indianapolis, on the other side, is in a rebuilding phase with unusually few playmakers on the roster. Andrew Luck will have Reggie Wayne as the solitary known receivers in the entire group, and on defense Robert Mathis and Dwight Freeney look as the only reliable defensive names.

10 points to cover in Chicago for a team that I fully expect to be in the playoffs, against another team that I think won’t even win four games in the entire season, looks like an easy bet.

My pick: Take Chicago to cover.

The Peyton Manning Broncos don’t have the necessary weapons to make it far into the season, but they do have the enough cards to give the Steelers a really hard time on Sunday night.

Manning won’t leave anything to chance, and despite is his first game as a Bronco; he’ll be ready for the challenge. Peyton is way to strict to look bad on a Sunday night televise game where he knows everybody will be watching.