The NFL playoffs are finally in the betting mix, and the best game of wildcard weekend features the Detroit Lions visiting the New Orleans Saints, this Saturday at 8 PM ET at Mercedes-Benz Superdome.

The NFL betting Odds have the Saints favorites by 10.5.

The Lions and the Saints are two really fun teams to watch; Detroit scores a lot of points but can’t defend the pass, and New Orleans is an offensive machine with too many weapons; both teams will score tons of points. 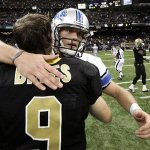 The key of this game is whoever gets more stops at some point in the matchup will win the game; that’s why I lean toward the Saints. New Orleans defense is one of the most underrated in the league; over the past five games they haven’t allowed more than 20 points, knowing that their offense is going to score more than 30.

The Saints beat the Lions 31-17 with Drew Brees throwing for 342 yards and three touchdowns in that game. “A lot has happened over the last four weeks,” Brees said. “I feel we’re playing
better football than we were then, and they’re playing better football”.

New Orleans is my favorite team to get to the Super Bowl; they are red-hot and it seems as there is no defense in the league that can slow them down.

Also, consider the Saints have covered the spread in the last eight games, and the game at the dome hasn’t been close. “If you don’t play your best, you’re out. There is no second chance. That was reiterated to us last year,” Brees said.