Tom Brady and the Patriots will face the Baltimore Ravens this Sunday, after they beat the Broncos and
the Texans, respectively, last Sunday, for a pass to the AFC Championship game. 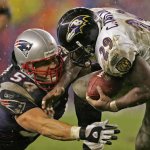 Brady looked amazing against the Broncos throwing for 363 yards, six touchdowns and one interception
in the victory 45-10. Tom could have broken the record of most TDs in a playoffs game, but they stopped
since the third quarter.
“We came in and started fast and it was a big win for us,” said Brady, who even got off a 48-yard punt.
“I have no idea about records and stuff like that. Anytime you score 45, obviously with the help of our
defense, and special teams played great — hopefully we can go out next week and play even better.”

Even the Broncos players knew they couldn’t slow down Tom Brady. “He’s been around the block a few
times,” cornerback Champ Bailey said of Brady. “He knows how to win games. If you’re not ready to
punch him in the mouth he’s going to eat you up all night”.

The Ravens, on the other hand, despite they didn’t look good, managed to win 20-13 over the Houston
Texans in a game where Baltimore’s offense never showed up.
“I always say there is a right way to do things, there is a wrong way to do things and there is just the
Ravens’ way of doing things,” linebacker Terrell Suggs said. “It wasn’t pretty but we’re not really a pretty
team. We got the W and now it’s on to the AFC Championship.”

The Ravens defense is up for a challenge against the best offense left in the tournament; however if the
offense doesn’t get better, they’ll suffer.

Baltimore smashed New England in Foxboro recently, but the Patriots seem to be a different
offense.