The Eagles have raced to near the top of the Super Bowl winning futures odds by making some serious moves in the period shortly after the new collective bargaining agreement was ratified.

Their biggest moves were made on defense, topped off by the signing of one of the  – if not THE – best cornerbacks in the NFL in Nnamdi Asomugha who will fit in a secondary with newly acquired DB Dominique Rodgers-Cromartie with the potential of retaining perennial Pro Bowler Asante Samuel.

Not a bad first few days for the Eagles, who had a middle of the road defense last season that was held together by a top ten offense during 2010.

They even scooped up Vince Young to back up Michael Vick, who is coming off a near MVP performance in 2010, putting Philadelphia in the drivers seat for a march into the 2011 playoffs.

The Eagles were bounced out the first round of the playoffs in 2010, but people are so quick to forget that the Eagles won the highly competitive NFC East in 2010 and looked to be only a few pieces short of making a serious run. 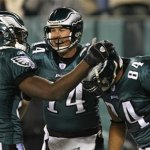 In 2011, the Eagles major obstacle right now is how they mesh these massive talents together to make a run. They have the offensive pieces to compete, but now they have a secondary that is ready to feast on the likes of Eli Manning, Tony Romo and Rex Grossman.

This division is Philly’s to lose, and at 8 to 1, a Super Bowl run has never looked so promising so early for the Eagles.