Once again the ever-disappointing San Diego Chargers are in the sportsbook top ten of Super Bowl winning odds heading into the regular season.

Do they still have a stellar Quarterback? Yes.

Offensive components to compete with the top teams in the league? Yes.

Division opponents that are beatable? Yes.

A defense capable of shutting teams down on a weekly basis? Hell yes! 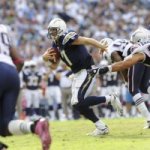 But year in and year out, the San Diego Chargers enter a season as a top tier team and stumble drunkedly out of the gates, then get their act together juuust in the nick of time, only to be repeatedly lambasted by the myriad of highly competitive veteran teams that the AFC has to offer in the post season.

San Diego is no longer a team that you can handicap on paper. Because on paper they are an easy bet to make. But without fail, the Chargers manage to underachieve to the level of hilarity.

Their players put up stats. Their team leads the league in multiple categories, but they just never seem to get it done. This season, they’ve actually lost a few more key components making any bet difficult on San Diego, let alone a measly 10 to 1 wager.

It seems inconceivable that they should be paired with some of the top teams in the NFL.

In fact, I’m not sure how high the number would have to get to take a serious look at the Bolts.

So if you’re looking for a big payback on Super Bowl futures this season, I’d wait out these Chargers to squeeze as much value as possible out of them down the road, or look for greener pastures elsewhere.