Each Tuesday this season, I am taking on the arduous task of predicting the score of every NFL game that week, along with providing my best bets for each game, and our three locks of the week (see bottom of page).

Last week, my best bets were just 1-2 (we hit on the Bengals upset, but took the under in Ravens/Bills and the Cardinals at home vs Washington). But I’m not worried. The same thing happened in Week 1 last year, and I rebounded nicely over the next 16 weeks to finish well above even.

Don’t look now, but Joe Flacco finally has some receivers. The much-maligned QB turned back the clock as Baltimore obliterated Buffalo 47-3 in Week 1. Are the Ravens that good or are the Bills that bad? A bit of both. 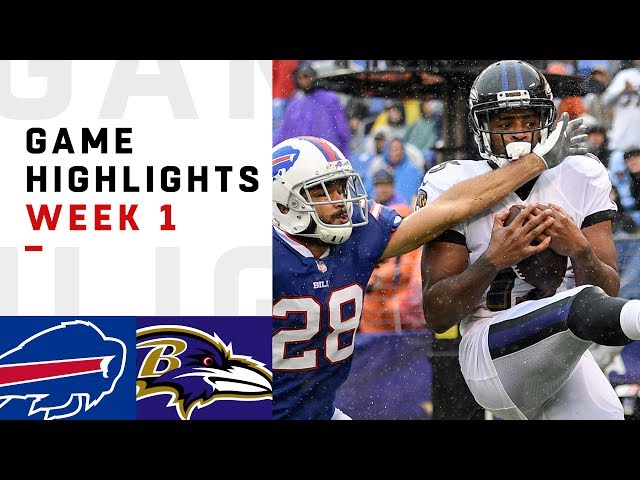 The Bengals earned their own impressive win over Indianapolis on the road, 34-23, as Joe Mixon had his best game as a pro: 95 rush yards, 1 TD on 17 carries; 54 receiving yards on 5 catches/7 targets. Andy Dalton was solid, as he usually is when he’s not under too much pressure. But that was against an anemic Colts pass rush. The Ravens racked up six sacks in Week 1 and will make life a lot more difficult for Cincinnati.

Four of the last five Bengals/Ravens games have finished at 40 points or lower, including the last three in Cincinnati. Two solid defenses keep the score low.

There won’t be any spread, moneyline, or total for this game until Aaron Rodgers’ status becomes clear. He injured his left knee against the Bears in Week 1 and, despite returning at halftime and leading the Pack to one of the biggest comebacks in NFL history, his status for Week 2 remains up in the air.

Packers’ HC Mike McCarthy said “no decision has been made” about whether Aaron Rodgers will play Sunday vs. the Vikings.

Remember, it was the Vikings who knocked Rodgers out with a broken collarbone just last season. This isn’t the defense you want to face when you’re hobbled.

I’m trying my best not to overreact to Washington’s Week 1 domination in Arizona (24-6). But they held an offense spearheaded by David Johnson to just 213 total yards … on the road. They have an underrated pass rush that should victimize the Indy offensive line, and their ground game — led by 33-going-on-28-year-old Adrian Peterson — will have as much success against the Colts as Cincinnati did last week (101 yards on just 20 attempts; 5.1 YPC).

This is a bad matchup for Andrew Luck in just his second game back, especially with his own rushing attack showing few signs of life (75 yards on 22 attempts; 3.4 YPC) and Washington’s secondary boasting two solid corners (Josh Norman and Quinton Dunbar).

I don’t know if James Conner (192 total yards, 2 TDs on 31 carries and 6 targets vs Cleveland) will keep putting up Le’Veon Bell-type numbers while Bell is holding out. The Steelers will face better defenses than the Browns in the weeks ahead. But not this week, so expect more gaudy yardage from the second-year RB.

Despite winning by double-digits (38-28) over San Diego in Week 1, Kansas City gave up over 500 total yards … and it would have been more but for some horrendous drops.

Pittsburgh’s own defense looked vulnerable against the Browns’ subpar attack, especially on the ground (177 yards on 38 attempts; 4.7 YPC). A lot of that was on scrambles by Tyrod Taylor, but Mahomes is an underrated runner who had 22 rushing TDs in college. The only certainty in this game: There Will Be Points.

Still in search of their first win since 2016, Cleveland is in another tough spot in Week 2, heading to the Superdome to face a still-elite Drew Brees. The Saints defense was absolutely abominable in Week 1, giving up 529 yards to a Ryan Fitzpatrick-led Buccaneers, but they were actually decent against the run (3.9 YPC) and the Browns need to be able to run the ball to score. They don’t have the receiving corps to exploit the New Orleans secondary the way Tampa did.

Count on a bounce-back performance from a Saints D that finished last year 8th in DVOA and more fireworks from Brees, Michael Thomas, and Alvin Kamara. The Steelers put up 470-plus yards on the Cleveland D on the road in a rainstorm. How many will the Saints put up on their home turf?

Given how good the Tampa offense looked in Week 1, and how susceptible the defense was, this game could be sneaky-high-scoring. Fitzpatrick was the QB of record in four Tampa games last year. The average total of those four games? 50.0 PPG.

The Falcons picked up where they left off last year, moving the ball and not scoring points in an 18-12 loss to Philadelphia. Until Steve Sarkisian commits to using Julio Jones in the red zone, don’t count on that changing.

The Panthers might be missing a little on offense, especially on the line and at receiver, but the defense is still elite and Cam Newton can still manufacture something out of nothing a few times a game. Plus new OC Norv Turner actually showed some creativity.

This is too many points to lay in what should be a low-scoring game between bitter division rivals. Losing Pro-Bowl linebacker Deion Jones (foot) won’t help the Atlanta defense, either.

Sam Darnold rebounded nicely from throwing a pick-six on his first NFL pass, finishing 16/21 for 198 yards and 2 TD in a stunning 48-17 rout of Detroit. In reality, though, this Jets win was powered by the ground game (169 yards, 4.7 YPC) and the defense (5 INT), as the Lions completely imploded.

The Dolphins held serve at home (27-20 vs Tennessee) but also got a bit lucky with both Marcus Mariota and Delanie Walker getting injured for the Titans in a weird game that was delayed due to lightning twice and took seven hours to complete.

This would have been a pick’em game before Week 1 and I’m not prepared to back a rookie QB against a veteran Miami team that went to the playoffs the last time Ryan Tannehill was healthy. The Jets won’t be winning the turnover battle 5-1 every game.

LIke Green Bay/Minnesota, the lines for this game won’t be open until Marcus Mariota’s status is confirmed.

We can keep this one short. The Bills are the worst team in the league. Nathan Peterman is horrible. The offensive line is horrible. The receivers are horrible. And the defense just gave up 47 points to a Baltimore team that finished 2017 ranked 27th in total offense.

The Charger defense was exploited by KC, but that might be the most lethal offense in the league. It will rebound in Week 2 and the Chargers will run away with this one.

If the forecast calls for a rainstorm, switch this pick to the under (43.0).

Just looking at the box score, it looks like Jimmy Garoppolo had a brutal Week 1 (15/33 for 261 yards, 1 TD, 3 INT). But he was hurt by drops, and the Vikings defense is second-to-none, particularly at home. We should see something closer to 2017 Jimmy G in Week 2 against a Lions defense that was just torched by the Jets.

The San Francisco defense is making definite strides, but it was still 26th in DVOA last year. Matt Stafford and the Lions should be able to move the ball better than last week, now that they have that abomination out of their system. This was a top-ten offense last year (25.6 PPG, 7th in NFL) and returns all its key pieces. This is another game where the guy who runs the scoreboard will be busy.

The Rams shrugged off a slow start to distance a bad Raiders team in Oakland on Monday night (33-13), while the Cardinals laid an absolute egg at home versus Washington (24-6). If Arizona couldn’t sustain drives against Washington, it’s not going to have much luck against an Aaron Donald-led Rams D that just held Oakland to 13 points.

The Rams also pounded Arizona in two meetings last year, 33-0 and 32-16. While David Johnson is back for Arizona, the Cards just don’t have the offensive line for that to make a huge difference. DJ doesn’t produce runs like this …

Leonard Fournette is already banged up for Jacksonville and Blake Bortles is 100% incapable of leading this offense, 2017 notwithstanding.

Tom Brady might not have a lot of weapons to work with, especially out wide, but he still has Rob Gronkowski (7 catches on 8 targets for 123 yards, 1 TD), a couple versatile RBs (Rex Burkhead, James White), and a speedy WR with a first-round pedigree in Phillip Dorsett (7 catches on 7 targets for 66 yards, 1 TD). That will be enough against a Jacksonville defense that will routinely be put in tough spots by its offense.

If there’s one thing that Week 1 reminded us of about Derek Carr, it’s that he is terrible under pressure. His quick trigger led to multiple picks against LA, and now he’s going against Von Miller, Bradley Chubb, and the rest of a Denver pass rush that sacked Russell Wilson six times last Sunday.

Case Keenum threw for 329 yards and 3 TDs in his Denver debut (though also had 3 INTs), while Royce Freeman and Philip Lindsay had identical rushing stats (71 yards on 15 carries apiece; 4.7 YPC). The difference between this week and last is that Derek Carr won’t be able to manufacture offense the way Russell Wilson did. The Raiders are in contention for second-worst team in the NFL after Buffalo.

The annual Giants/Cowboys Sunday nighter is almost a must-win for both teams if they want to be in the NFC playoff race. The Cowboys are a shell of the team that went 13-3 two years ago. Their offensive line isn’t creating holes for Zeke Elliott nor protecting Dak Prescott from being pressured. Dallas mustered just 232 total yards last week in Carolina. Only Arizona and Buffalo had fewer. The defense looked solid (293 yards against) but now has to face a New York attack with three dynamic playmakers in Odell Beckham Jr., Saquon Barkley, and Evan Engram.

The Giants had a respectable 324 yards (210 passing, 114 rushing) against Jacksonville’s league-best defense (per 2017 DVOA). Their own defense looked improved versus last season; outside of Bortles’ 42 yards on four carries, they held the Jaguar ground game to 95 yards on 24 carries (3.9 YPC). There’s value on the Giants as a ‘dog.

Can the Bears bounce back from their second-half implosion against Green Bay in Week 1, a game they led 17-0 at halftime? There’s reason for confidence, because Seattle’s offensive line is still Swiss cheese. It gave up six sacks to Von Miller and Denver last week and it doesn’t get much easier in Week 2 against Khalil Mack and Roquan Smith.

That said, I’m still not confident this Mitch Trubisky-led offense can produce enough points to cover more than a field-goal. Russell Wilson (19/33, 298 yards, 3 TD, 2 INT) finds a way to score points week-in and week-out, whether it’s Jimmy Graham at tight end or Will Dissly (3 catches, 105 yards, 1 TD), whether his WR1 is Doug Baldwin or Brandon Marshall (3 catches, 46 yard, 1 TD). Bears get in the win column, but it’s close.