Washington and Carolina are on bye this week, but there are still 15 games on the slate and a couple numbers that stand out from a betting perspective. Below, find my score predictions and best bets for each game. As always, scroll to the bottom for the Locks of the Week, which are the only picks I recommend following. The NFL betting market is arguably the toughest to beat in all of sports wagering. Selectivity is key. Volume is a killer.

Both teams are/could be missing key defensive players (Everson Griffen & Marcus Peters). But these are also two of the most dominant defenses in the league. The Rams’ front seven, in particular, is going to feast on Minnesota’s weak offensive line, keeping the score low on at least one end. 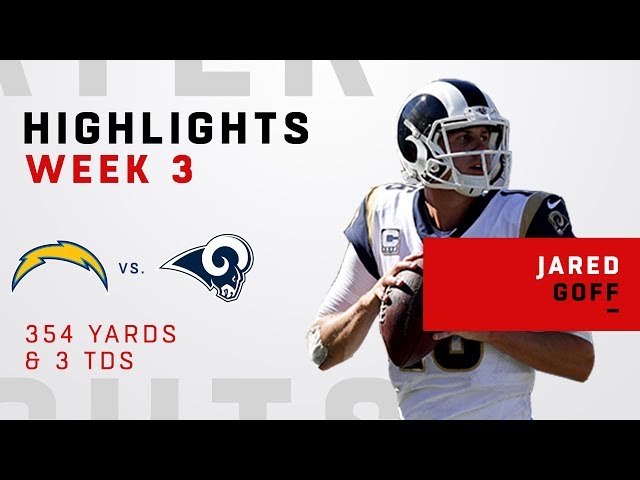 If the 1-2 Patriots lose this one, they’ll be three games behind the surprising 3-0 Dolphins in the AFC East race. The Pats have huge issues on both sides of the ball. Their offensive and defensive lines are subpar. There’s no running game and little in the passing game beyond Rob Gronkowski. But Bill Belichick and Tom Brady have found a way to win the East nine straight years, and they’ve only lost five home games over the last four seasons.

Bill O’Brien’s 0-3 Texans face a must-win. Despite losing all three so far, they are 12th overall in DVOA and have just a -15 point differential. If they cut down on the turnovers (5) and miscues, better results will follow. But Indy’s defense is playing surprisingly well, racking up 10 sacks in just three games and generating five takeaways. While Andrew Luck isn’t back to his old self yet, he’s still been a more effective pivot than DeShaun Watson so far, and another week could see him make further gains.

Without Deion Jones and Keanu Neal, Atlanta’s defense has been terrible. Now it’s also down Ricardo Allen. Even though Cincinnati will be without Joe Mixon for another week, they should be getting AJ Green back, and they have more than enough weapons to move the ball in Atlanta’s dome. They would have put up close to 30 points last week if not for four Andy Dalton INTs.

The Bengal defense is decent, but is also somewhat turnover-dependent. The Falcons have only turned the ball over twice this year. Having seemingly solved their red zone issues over the last two weeks, count on Matt Ryan, Julio Jones, and Calvin Ridley continuing to put up points at home.

Where the hell did that come from, Buffalo?! The biggest Week 3 upset saw the Bills win in Minnesota as 17-point underdogs. Don’t read more into that than you should, though. They didn’t approach 300 yards of total offense and benefited from terrible Viking turnovers, precipitated by a terrible Viking offensive line. Aaron Rodgers, hobbled or not, doesn’t make the same mistakes. On the road for the second straight week, count on the Bills to come back to earth.

Laying double-digits is not recommended, though, since Rodgers is one hit away from heading to the locker room. Instead, take the under, as Green Bay’s offense is averaging just 23.3 PPG and Buffalo’s can only really score when the defense puts it in a prime spot.

Matt Patricia solidified the ice that had already started to thin under his feet with a 26-10 Sunday night beatdown of the indomitable Patriots. Now a confident Lions team heads to Big D, where it will have the pleasure of facing the NFL’s least interesting offense.

Unfortunately for Detroit, Dallas’ run-first approach is apt to give the Lions trouble as they rank 27th overall in defensive DVOA against the rush. Dallas’ D, on the other hand, has become the team’s strength. It held the Giants to just 255 yards of total offense in their only home game to date, which was also their only win (20-13).

Classic Blake Bortles came out in Jacksonville’s 9-6 loss to Tennessee, but the Titans have long had his (and Jacksonville’s) number. This Jets defense is not going to cause the same problems, and the Jaguars’ vaunted pass defense is going to make Sam Darnold wish he was still at USC. This one gets lopsided in a hurry, especially with Leonard Fournette returning to the Jaguar backfield.

“FitzMagic” is already starting to ebb. While he surpassed 400 passing yards for an NFL-record third straight game, Ryan Fitzpatrick had multiple costly interceptions in a narrow Week 3 loss to Pittsburgh (30-27). He’s now facing by far the best defense he’s seen this year.

The Bears are first overall in defensive DVOA, third against the pass and fourth against the run. Mitchell Trubisky has been good enough early in games to get the Bears out to another lead and let the defense take it from there. But again, the Under is a better play than the spread, even though you have to lay -120.

Carson Wentz should look more comfortable in his second game back from injury after an underwhelming line in Week 3 (25/37, 255 yards, 1 TD, 1 INT). Somehow Tennessee is 2-1 despite scoring 47 points through three games (15.7 PPG) and having a -1 point differential. Their situation at QB is still in flux, but neither Marcus Mariota nor Blaine Gabbert has been effective, healthy or otherwise. The Eagles were a great road team last year (6-2) and should look more like the Super Bowl champions they are as the year goes on.

The Cardinals are Josh Rosen’s team now. That may be an unwelcome development for the UCLA product given the state of Arizona’s offensive line, which ranks deadlast according to Pro Football Focus’ pass-blocking ratings. Seattle’s pass rush is still decent without Michael Bennett (eight sacks in three games), and safety Earl Thomas is still a ball hawk in the secondary.

Russell Wilson could potentially get top WR Doug Baldwin back this week, but even if he doesn’t, the ground game is showing signs of life. Chris Carson had over 100 yards rushing in Week 3 against a stingy Dallas defense.

Last week’s 21-17 win over the Jets may have been Cleveland’s first since 2016, but rookie QB Baker Mayfield is also undefeated in the NFL. Trends! Before Mayfield took over under center, this Browns team was solid everywhere but QB. I’m buying Mayfield stock in large quantities and predicting Cleveland now contends in the uber-tough AFC North.

Even if he regresses a little from his glorious Week 3, he’s facing a Raider defense that’s 30th in pass rushing and deadlast in sacks, plus a Raider offense that’s averaging just over 17 PPG and working in a new kicker. Browns make it two straight!

The 49ers start their Jimmy Garoppolo-less rest-of-season in Week 4 with CJ Beathard set to take the reins of the offense. Given that their defense has given up nearly 30 points per game so far, this could be an outright disaster. The 49ers averaged just 16.3 PPG in six games with Beathard at the helm last year.

Lucky for Beathard, Joey Bosa remains out and the Charger defense isn’t the same without him. The Chargers will put this one out of reach early, like they did against Buffalo, and the Niners will do their part late to hit the over.

The Giants got off the schneid last week with a 27-22 win over winless Houston, but they were outgained by a wide margin and won the turnover battle 2-0. This will the shootout last year’s game was supposed to be, and Eli Manning won’t keep up with Brees.

The Ravens defense has been dominant in two home games (47-3 win vs Buffalo; 27-14 win vs Denver) and got lit up in its one road game (34-23 loss at Cincinnati). PIttsburgh has scored 30 or more points each of the last two weeks, and were only held to 21 in the first week because of the weather. Even without Le’Veon Bell, they are putting up points almost at will (29.3 PPG). Unfortunately for Mike Tomlin, his defense is giving up points at an even higher rate (30.0 PPG). They surrendered 42 at home to the Chiefs in Week 3.

The forecast calls for a sunny ~70° in Pittsburgh on Sunday evening. This is not going to be the classic low-scoring Ravens/Steelers affair you’ve seen in years past. Also, their Week 16 game last year ended 39-3827 Steelers. And Pittsburgh still had Ryan Shazier during their Week 4 game (26-9 Steelers).

I hate picking against the Broncos at home. They have one of the best home-field advantages in the NFL. But I am not picking against Patrick Mahomes and the Chiefs until they give me a reason to. The first-year starter set an NFL record with 13 TD passes in the first three games of the season and is now the NFL MVP favorite. This week he faces a Denver defense that’s banged up in the secondary and not getting nearly the production you’d expect from a pass rush that boasts both Von Miller and Bradley Chubb.