The stakes are high at Dallas this weekend as the Cowboys host division rivals New York Giants,
in a game that should decide where the near future of the NFC East will go. The game is on
Sunday at 8:20 PM ET and the Boys are favorites in the NFL odds by 3.5 points. 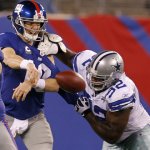 Dallas lost a great opportunity to be ahead in the division last week when they lost at overtime
19-16 to the Cardinals. “Most importantly, we have to put this one to bed and go to the next
one,” coach Jason Garrett said.

The Cowboys are 4-7-1 against the spread, and their lack of stability in the coaches decisions
and the quarterback playing style, make Dallas a team that can’t be trust in terms of betting.

Dallas is 3-14 against the spread as favorite, and they haven’t beaten the NY Giants in the new
Cowboys stadium yet. So, if you are thinking there is a kind of home field advantage sensation
for the Boys; you better think again.

The Giants almost beat the Green Bay Packers last week but failed in the attempt with a 38-35
result. The G-men are 22-10 ATS when they play away from home after allowing 30+ points in
the game before.
“The mindset is looking ahead,” quarterback Eli Manning said. “It doesn’t matter what you’ve
done last week or what your record is. It’s what you’re playing for, who you have this week.
And you have Dallas, Sunday night football, that’s a big one”.

Other betting trends mention Dallas is 4-10-1 ATS in their last 15 games when playing NY
Giants, and 2-5 ATS in its last 7 games at home.