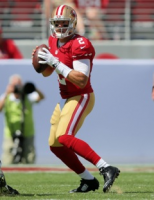 Two weeks of pro football are in the books. If you’re ultra-impressionable – or job is to make hot-takes – then Thursday night’s Houston/New England game is clearly a preview of the AFC Title Game, while Indy and Washington (both 0-2) might as well stop playing because their seasons are over.

A lot can be learned from the 32 games that have been played thus far, but before making grand assertions, some analysis and reminders are worthwhile.

Let’s talk about some early observations to consider moving forward.

A Rose by any Other Name (the 49ers are Predictable)

You can dress Chip Kelly and Blaine Gabbert up in new uniforms, but you are who you are. Kelly’s teams are going to run a lot of plays, score a lot of points, and get killed in time of possession. His defense is going to wear out. Kelly’s Eagles hit the over 27 times in 48 games over three years, and bookmakers knew full-well the Eagles would play high-scoring games.

Gabbert is a turnover machine, which leads to defensive touchdowns and great field position for opponents. San Francisco won their opener over the Rams (28-0), and Gabbert did his best to throw several picks. But LA wouldn’t oblige, letting would-be pick-sixes slip through their grasp. If the Rams had converted those into points, the game could have easily hit the over. It also could have hit the over if LA had anyone other than Case Keenum at QB. Pitching a shutout is a nice start, but in reality, it didn’t come against an NFL offense. Unsurprisingly, Week 2 was very different.

In Week 2, Gabbert was picked off twice in a 43-27 rout at the hands of Carolina. Imagine how many points would have been scored if the Panthers and 49ers weren’t four of eight in the red zone.

NFL teams are off to an 18-14 start at home this year. Last season, home teams went 138-118. It doesn’t take a genius to understand that being at home is an advantage. I bring this up to temper your excitement on Houston and Denver; they’re both 2-0 with two home wins under their belts. That just means they have done what they are supposed to. On the flip side, don’t write off Miami. The Dolphins are 0-2, but they have dropped competitive games in arguably the two toughest environments in the league: at Seattle and at New England.

It pays to look beyond the record. Consider who beat whom and where games were played to get a more accurate sense of where teams really stand at this early point in the year.

We’ve all heard that old saying: defense wins championships. That’s not always true. It’s more accurate to say that bad defenses lose championships (and a lot of other games, too). The Colts came into the year with high expectations but you can’t give up 73 points in two games and expect to succeed. They are 0-2 for good reason. The betting public loves elite QBs, and Andrew Luck is one of the best; there’s a good chance the defensively generous Colts get over-bet in the next few weeks.

In a similar vein as Indy, the Raiders (69 points against) and Bucs (64) each have a victory, but without improvement on defense, won’t be in contention.

Meanwhile, the 0-2 Dolphins have given up the fewest points in the AFC East, while three 1-1 teams in the NFC West (Seattle, St. Louis, Arizona) have all surrendered 31 points or fewer. Meanwhile, Tennessee (also 1-1) has given up a respectable 40 points on the year. That number looks even better  but 14 of those came on defensive scores. All could provide under value as the year moves along.