Patrick Mahomes and the Chiefs are heavily favored to win the most games in the NFL in 2021 and return to the Super Bowl after last year’s embarrassing 31-9 defeat at the hands of Tom Brady’s Buccaneers.

But, what other teams can challenge Kansas City for AFC supremacy next season? Let’s look at the odds to win the conference, and be sure to check out our tips for betting on NFL football games.

Josh Allen’s transcendent leap in 2020 led the Bills (+700) to their first AFC East title since 1995. While the Chiefs defeated them handily in the AFC Championship Game (38-24), there’s plenty of room for optimism after offensive coordinator Brian Daboll somehow went unhired in the offseason. With Allen and Stefon Diggs forming one of the league’s most dangerous connections, it’s up to head coach Sean McDermott to fix the team’s mediocre defense.

Baker Mayfield and the Browns (+900) were reborn again under first-year head coach Kevin Stefanski. Cleveland could make another leap next season after devoting a ton of draft and free-agent resources to a defensive side of the ball that already included DPOY contender Myles Garrett.

The Ravens (+900) drafted Rashod Bateman and signed Sammy Watkins to give Lamar Jackson more weapons, but the jury is out whether OC Greg Roman can scheme a modern passing attack. It will also be interesting to see if Bill Belichick and Josh McDaniels can revive the New England Patriots (+1100) after a down year without Tom Brady.

Best of the rest

The Colts (+1200) are replacing Philip Rivers with Carson Wentz and re-teaming the Eagles’ No. 2 overall pick in the 2016 draft with Frank Reich. With a powerful offensive line and a stud running back in Jonathan Taylor, Indianapolis should be the class of the AFC South.

While the Titans (+1200) added Julio Jones to form a three-headed monster with third-year receiver AJ Brown and Derrick Henry, the offense could regress after losing former OC Arthur Smith to Atlanta.

A.J. Brown and Julio Jones will be a special duo pic.twitter.com/bNBF9V6BYS

It can’t be fun sharing a division with the Chiefs, but the Broncos (+1400) and Chargers (+1400) are adapting. Denver signed Kyle Fuller and drafted Patrick Surtain II at No. 9 overall pick, adding two cornerbacks in hopes of slowing down Mahomes, while Los Angeles hired head coach Brandon Staley, who turned the Rams defense into the No. 1 unit in the National Football League in 2020.

Finally, if you believe that rookie wideout Jaylen Waddle and fellow speedster Will Fuller will make Tua Tagovailoa look a helluva lot better in his sophomore season, the Dolphins are available at +1800.

The Context of Carl Nassib’s Historic Coming Out 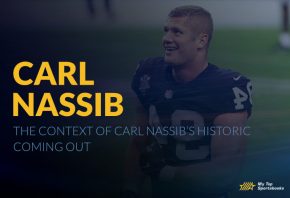 The Context of Carl Nassib’s Historic Coming Out