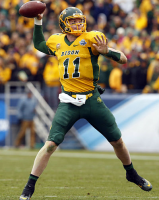 Despite what anybody tells you, the NFL Draft is a horrible spectator sport. Nothing happens. The impact of the draft is huge, but, at the event itself, there are no touchdowns, no field goals, not even a safety. Heck, even the overly televised scouting combine showcases athleticism. No such luck at the draft.

In all honesty, most experts have no idea who is going to be good. It is hour after hour of guessing. There just isn’t a lot of entertainment value, unless of course you bet on it.

Want to give your draft day a little dose of drama? Here are my best betting tips for the 2016 edition.

I’d prefer the number go to three (and have the odds shift to around +150). At worst you’d get a push. But, as is, this feels like a lock. The first two picks are going to be QBs (Jared Goff and Carson Wentz). That means only one of the other 29 teams with a first-round pick needs to draft another signal caller, the most important position in all of sports.

Paxton Lynch of Memphis has been rumored as early as the 12th or 15th pick, and if he makes it until the end of the first round, why wouldn’t Denver grab him at no. 31? Most mock drafts have Michigan State’s Connor Cook, and Penn State’s Christian Hackenberg as second rounders, but teams can get quarterback happy, particularly if they think another squad is interested.

Total Running Backs and Wide Receivers Drafted in 1st Round (under 5.5, -280)

Running backs aren’t highly valued anymore. Only two have gone in the first round during the last three drafts (Todd Gurley and Melvin Gordon last year). Ohio State’s Ezekiel Elliott is likely to be a first day selection. Alabama’s Derrick Henry is more of a longshot.

In terms of wideouts, we might not see any go in the top 20, but Laquon Treadwell (Ole Miss), Will Fuller (Notre Dame), and Corey Coleman (Baylor) should all fit in the back end of the first round. TCU’s Josh Doctson may be a first round pick, though that is not guaranteed. A total of four or five is lot more likely than six.

Laremy Tunsil will be off the board early, and Treadwell should be picked in the early 20s. This bet comes down to Robert Nkemdiche. He was one of the top recruits in the country coming out of high school, but never posted great numbers as a pass rusher. That said, he was an All American and has all the skills to be a Pro Bowler.

The real knock on Nkemdiche is his, let’s say, extracurriculars. He was arrested for marijuana possession after falling out of a hotel room prior to his team’s 2015 bowl game. He’s also said he wants a pet panther. (Seriously.)

But, in the end, NFL teams are looking for stars, and Nkemdiche has the potential to be one. Bank on someone taking a chance on the troubled DE in the first round.