Geno Smith may have lost his mind this week as he thinks the Kansas City Chiefs will take him as the number one pick in this year’s NFL draft, despite they already have Alex Smith and Chase Daniel in the position and plenty of holes to fill. 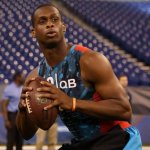 “I hope Kansas City is legitimately interested,” Smith told Jim Corbett of USA Today.  “I hope I go No. 1, but, hey, we’ll see.  The Chiefs are bringing me in, so I’m going in there thinking that they’re interested [in me] because I am in them.

“I’m just going to do what I’ve always done, try and impress them, just be myself and allow the process to do it’s job and get ready for whoever drafts me.  I’ll be going Monday to Friday, working out for different teams.”

At the NFL Network, reporter Ian Rapoport said the Chiefs are “fascinated” by Smith as Andy Reid considers him a young Donovan McNabb.

The Kansas City Chiefs have been listening for options to trade the number one picks, but they have decided yet what to with it.

“All of the teams have been really impressed with me, they’ve all said good things”, Smith added. “I’m not going to put my hope or my eggs in one team’s basket. All of them have shown a high level of interest. It’s not a case where I know of one team being more interested.

“We’ll just have to see on draft night.”