One of the most intriguing games of the weekend put the Green Bay Packers and the Baltimore Ravens head to head, this Sunday at 1 PM ET at M&T Bank Stadium in the NFL week 6. 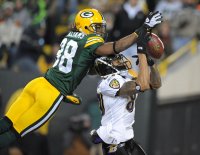 Both teams won last week, but they haven’t looked as the great squads we all know them for.

The Packers will go without playmaker Clay Matthews on defense; he’s out with a broken thumb.

“I mean, Clay Matthews is our best player on defense. But this is pro football,” Head coach Mike McCarthy said. “We’ve been down this road before. It’s an excellent opportunity for others to step up and make plays.”

The Ravens biggest problem is getting QB Joe Flacco to his best form; he has thrown six picks and just two touchdowns in the last two weeks.

“Joe never gets fazed,” coach John Harbaugh said of Flacco. “He’s not going to get rattled.”

The Packers are 3 point favorites despite playing away from home. Baltimore is 1-4 ATS in its last 5 games when playing Green Bay.  The game total was set at 48.5 after it opened at 47.5.