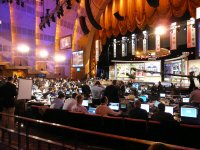 The NFL Draft begins Thursday night in Philadelphia, and who your favorite team selects this weekend has a big impact on how they do on the field going forward.

Many people love the draft despite not really having any idea if the guard from Indiana is better than the edge rusher from Ohio State University. However, if you want to make the it more interesting, throw a few bucks on it.

To help you out, here are a few of the more popular props.

Quarterbacks taken in first round: Over 3.5

You get 17/10 odds that a fourth QB is selected in the opening round. It is almost a certainty that North Carolina’s Mitchell Trubisky, Texas Tech’s Patrick Mahomes, and Clemson’s DeShaun Watson will be chosen. Then you have Notre Dame’s DeShone Kizer and Cal’s Davis Webb, who are both on the first round bubble. Most mock drafts have them on the outside looking in. That said, consider who picks at the end of the first round. A slew of squads with older quarterbacks who eventually need a new signal caller can get their guy and let him learn behind established starters.

The Steelers, Falcons and Saints have the final three picks of the opening round. Even if those team’s decide against going for a QB, the first four teams choosing in the second round (Browns, 49ers, Jaguars, and Bears), all need a future under center. Instead of waiting and hoping Kizer or Webb are there, it doesn’t take a lot to move up a few picks, and snatch your guy. It’s not hard to imagine Cleveland, San Francisco, or the Bears passing on a quarterback very early, then making a small move later to “get their guy”.

Running backs taken in first round: Over 2.5

It’s not a ton of fun to lay almost 3/1, but who among LSU’s Leonard Fournette, Stanford’s Christian McCaffrey, and Florida State’s Dalvin Cook is not going to be picked among the first 32 players? Fournette will for sure be in the top ten, while McCaffrey will be off the board by 20. So this wager comes down to Cook.

A five star prospect in high school, he set the FSU record for career rushing in just three seasons. Cook is an explosive play maker in a league that values big play ability. Recently, his stock has been falling because of bad testing numbers. However, how many teams can watch the college tape and see his vision, which doesn’t get tested in the combine, and stay away? There are some character issues in Cook’s past, but guys who are compared to Clinton Portis, Chris Johnson, and Jamaal Charles don’t usually last until the second round.

Ohio State players taken in first round: Over 3

The chances of this ending in a push and you getting your money refunded are extremely strong. However, the over is 5/4, and the risk seems minimal. Corner Marshon Lattimore, and safety Malik Hooker are top ten picks. Corner Gareon Conley is almost surely a top 20 guy. Unless Conley sinks like a rock, he’ll secure a push for this wager.

So how do you make money? It may not seem likely, but offensive lineman Pat Elfein, linebacker Raekwon McMillan, or athlete Curtis Samuel could jump up on someone’s board. All three have easy to understand positives and negatives: Elfein developed late but is dependable, McMillan lacks some athleticism but played great when it counted, and Samuel is small and lacks a true position but can create huge plays. The upside outweighs the downside on the wager, both in odds, and probability.