The Falcons suffered two scares last week, first they had to come back from a 23-7 deficit to beat the
Carolina Panthers, and then, their coach Mike Smith suffered heart problems after the game. Smith is
fine; he’ll be on the sidelines for the game against the Jacksonville Jaguars this Thursday night.

Atlanta is trying to clinch a playoffs spot for the third time in four years, and a win against the Jaguars
will put them in a position to do so. “We approached it as the first of four legs,” quarterback Ryan said
about the victory over the Panthers. “We’ve knocked the first leg out, and now we’ve got to move on
and keep going”.

The Falcons are an above average football team that can run and pass the ball, but there is something
about them that’s just unlikable; it seems as they can’t win or close game against tough opponents. 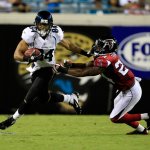 The Jaguars arrive to this game after scoring the most points in four years, in the victory 41-14 over the
Tampa Bay Buccaneers. Maurice Jones-Drew scored a career-high four times; however, Blaine Gabbert
still threw for two interceptions; something that needs to be fix for the future.

Atlanta is clearly playing for something, while most of the Jaguars players are trying to save their jobs,
including interim coach Mel Tucker.

Both of these teams are bad against the spread, and the betting trends don’t say a whole lot, but you
should consider these two tips for the game total: Jacksonville is 6-0 UNDER in road games, and Atlanta
is 7-0 UNDER after a straight up win.

My NFL Free Pick: Take the Under.