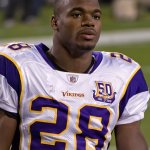 Today, Adrian Peterson avoided jail time by pleading guilty to misdemeanour reckless assault. With his legal issues almost in the rear-view mirror, the Vikings standout can refocus his attention on football.

Peterson is currently on the “Exempt/Commissioner’s Permission List”, meaning he still has to be reinstated by the league before he can return to action.

Will he be reinstated?

The NFL is anxious to clean-up its image in the wake of myriad domestic violence cases, making Peterson’s reinstatement less likely. However, Peterson’s case is getting a more nuanced reception from the general public, likely because it involves the disciplining of a child which – for better or worse – is viewed through a different lens than domestic violence against a partner.

Prior to this incident, Peterson had a sterling reputation, especially in Minnesota where he is (or at least seemed to be) involved with numerous charities. In the wake of the child abuse allegations, though, the Minneapolis Star-Tribune published a report detailing numerous off-field issues for Peterson, including an allegation of rape dating back to 2011 and the revelation that much of his charity work may have been bogus. If none of that had come to light, the NFL would likely be willing to give Peterson a second chance sooner rather than later. As it is, the league risks having to do an about-face if they hurriedly reinstate Peterson.

That being said, the justice system has largely run its course against Peterson (at least for the time being), and he will be walking away with a slap on the wrist. The lack of legal consequences makes it harder to justify continued banishment.

All of the above leads to the conclusion that, while Peterson is likely to be reinstated at some point, we slightly favor next season versus this season. Of course, there is always the possibility of new allegations or revelations surfacing, which keeps alive the possibility that AP’s NFL career will be on extended hiatus.

The Vikings are the frontrunner to be Peterson’s team if/when he returns, largely due to the fact that he has a decent shot at coming back this year. After the Vikings, the Texas teams come in at number two and three as Peterson has expressed a desire to play in his home state. But with the run game being so dominant in Dallas this season, there is a good chance the Cowboys will re-sign DeMarco Murray instead of going after AP. And with Arian Foster’s resurgence in Houston, the Texans may not have need for him either. Rounding out the top five are two teams with terrible running games: the Oakland Raiders and Detroit Lions. If the Vikings part ways with Peterson, I am sure part of him would be eager to move to the rival Lions and have the chance to run roughshod over his former team.

Enough talk. Let’s take a look at some numbers:

Odds on which team Adrian Peterson will play for first, if and when he is reinstated: