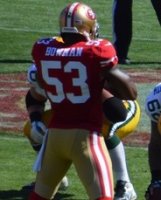 Sometimes when you hear a narrative long enough, you begin to believe it. That doesn’t make the storyline true. Every year the media casts judgment on teams, particularly bad teams, early in the season, and however they have been labeled sticks, whether it proves right or wrong.

This year is no different, and teams that have been given the short end of the labelling stick can present opportunities for savvy bettors.

Bay Area sportswriters, generally among the more reasonable in the country, first told us that the Niners were going to be a disaster thanks to losing head coach Jim Harbaugh and several high-profile players. San Francisco surprised Minnesota in Week 1 and looked like they might be able to challenge in the NFC West. But then QB Colin Kaepernick forgot how to play quarterback and the team won just once in its next seven games. Sitting at 2-6 prior to hosting the Falcons on Sunday, the Niners looked like they might be tanking for a top draft pick, benching Kaepernick in favor of 2011 draft bust Blaine Gabbert.

Then the unthinkable happened; Gabbert led the Niners to a win over the 5-2 Falcons.

But was that really unthinkable? San Francisco’s six losses are to Pittsburgh, Arizona, Green Bay, New York (Giants), Seattle, and St. Louis. They’ve played a top-five schedule and have the best strength of victory mark in the NFL. Don’t get me wrong. This team has looked like an unmitigated disaster at times. The Niners are just 4-5 against the spread, and have not been competitive in the majority of their losses. But, as a bettor, there are reasons to like them going forward.

First and foremost, the entire country thinks they’re terrible, so the lines may get more points than are warranted; second, their schedule eases up in December; third, they may actually be better with Gabbert at QB (though scoring two TDs against the Falcons D isn’t a monumental feat); and, lastly, first-year coach Jim Tomsula may have simply needed some time to get his squad playing its best ball.

Folks who study analytics talk about regression to the mean. Luck tends to even out. The Cowboys are 2-6 straight up and against the spread after Sunday night’s overtime loss to Philadelphia. They haven’t won since Tony Romo was injured in Week 2. However, their last three games have been an OT loss to Philly, a one-point setback against Seattle, and a touchdown loss to the Giants where Dallas outgained New York by nearly 200 yards. The Cowboys have also played the toughest schedule in the NFC.

Before Romo returns, and the odds get rattled, bet the Boys. Average handicappers keep losing with Dallas and will stop wagering on them. Now is exactly the right time to jump on board.

The Chiefs are 3-5 SU and ATS with critical road games at Denver and San Diego looming. Two of their three victories (at Houston and against Detroit in London) fail to impress; and their 23-13 win over Pittsburgh looks less than incredible when you consider Landry Jones led the Steelers’ offense.

But, like with the Cowboys and Niners, there are reasons to like the Chiefs going forward, and a lot of it has to do with the narrative that’s dominated their season to date. When the Chiefs were mired in their five-game losing streak (Week 2 – Week 6), QB Alex Smith and head coach Andy Reid were labeled an unimaginative pair that couldn’t score against your local JV defense. When star RB Jamaal Charles was lost for the season, the lamentations that (a) the Chiefs can’t score, and (b) their season is doomed, only became more pervasive.

But now the Chiefs have won two straight (the aforementioned wins over the Steelers and Lions) and get a bit of a reprieve, schedule-wise. (They have played the hardest schedule in the league thus far.) The stats also say they’re better than their 3-5 record, sitting 12th in the NFL in scoring offense and 15th in scoring defense.

They’ll head to Denver off a Week 9 bye. As a head coach, Reid is 13-2 following the rest week. Even if the Chiefs don’t win on Sunday, they have a great opportunity to cover.