I would bet nobody imagined a couple of months ago that Kyle Orton would leave the Denver
Broncos to join the Kansas City Chiefs, to then have the faith of the Broncos on his hand. Orton
will seek for revenge when the Chiefs take on the Broncos this Sunday at Sports Authority Field
at Mile High.
“We knew we may have to face him down the line, and we kind of took that risk,” Elway said
of cutting Orton, who was claimed off waivers a day later by the Chiefs.

The lines have the Broncos as -2.5 favorites over the Chiefs. 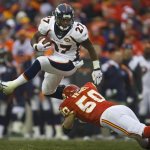 The Chiefs are eliminated from a possible playoffs spot, but that won´t stopped them from
trying to end all the Tebow talk. Also, Kansas City will play for their coach Romeo Crennel’s job;
if they win Crennel will probably stay as the head coach for next year.
“I know there are some questions about my status, and how this game might affect my
status,” Crennel said. “I’ve said all along that at the end of the year, a decision is going to be
made, and I was going to do the best I could for the three games I had an opportunity to do
that.”

Kansas City is not a team that can stop the run on a regular basis, but at least their defense is
playing a lot better. Denver is the team with the best running game in the league; and that will
hard to stop for the Chiefs.

There is something in the air that tells me that Orton will get his revenge over Tebow and the
Broncos, but the stats say take the other way.