The Atlanta Falcons and the New York Giants will square off this Sunday, in one of the most even playoffs games, in years. They will meet at MetLife Stadium this Sunday at 1 PM ET.

The Giants are favorites by 3 points in the NFL odds.

The Giants entered the playoffs after beating their hated rival, Dallas Cowboys, in the last game of the regular season. New York is arguably the most irregular-unstable team in the league. 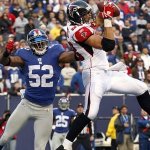 “I would not want to face the New York Giants in the playoffs right now,” running back Brandon Jacobs said. “I got the same feeling (that I had in 2007). There’s a lot of guys that are here that weren’t here a couple of years ago when we went, but it’s the same kind of feeling that I have”.

New York are the worst team running the ball in the league; they will need to establish the run if they want to avoid getting into a one dimensional offense, and, therefore, help Eli Manning in the offensive side of the ball.

The Falcons, on the other hand, are not a great team outside the dome, and the tight end Tony Gonzalez will try to win his first playoffs game of his long career.

Atlanta has a shot of winning against the Giants, but their game needs to raise up to the highest, otherwise they´ll be suffering another one and done in the postseason; just as last year.

My Pick: Take the Giants to win it but the Falcons to cover the spread.