The preseason battle of New York clash the  Jets and the Giants this Saturday at 7 PM ET at MetLife Stadium, in a game that matters a little more for the unsuccessful franchise of the city; the one that wears green. 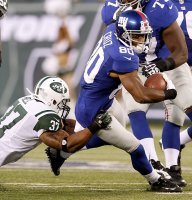 The Jets haven’t decided about who will be the starting quarterback of the 2013 season.  Geno Smith nor Mark Sanchez have separated one from the other, and the coin is still in the air.

Smith will start on Saturday and could see most of the reps, but there’s no word from the coaches that hints he’s leading the battle.

“Obviously in this league you can lose games faster than you can win them at that position,” Rex Ryan said. “You got be able to protect the football first and foremost … and also be able to make plays yourself.”

The Giants will be looking at the offensive line performance, mostly.  Center David Baas and lineman David Diehl suffered injuries that forced the team to reconfigure the unit. Diehl had thumb surgery and will be sidelined six weeks.

“The doctor felt that David needed this for him to go forward,” Giants Coach Tom Coughlin said. “He’ll get fixed, and he’ll be back.”

Slot receiver Victor Cruz won’t be for this game either after he suffered an injury on the heel on Sunday against the Colts.

The NFL odds have the Giants as 2.5 favorites, and the game total was set at 38.