Both the Detroit Lions and the Cleveland Browns had a bad 2012 season; that’s why they need the preseason to get into full gear for week one.  The game is this Thursday at 7:30 PM ET. 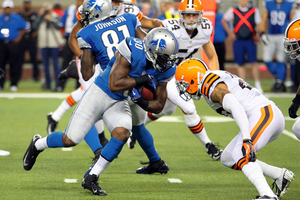 Both are 1-0 during this preseason.  The Lions beat the Jets in an impressing matter, especially from the rookies.  Ziggy Ansah made a tremendous impression when he intercepted Sanchez’s pass and returned for a 14 yards TD.

“It’s not going to stop there. I think he has a lot of great natural talent,” Detroit defensive tackle Ndamukong Suh said. “He has great instincts for finding the ball and making plays.”

For the Lions, the starting quarterback Matthew Stafford went 3 for 8 for 58 yards, no scores or interceptions.

The Browns beat the Rams 27-19 in the first game under coach Rob Chudzinski. Brandon Weeden has a good game connecting 10 of 13 for 112 yards and one TD.

“I thought he did a good job,” said Chudzinski. “First impression was that we came out, and we had some good drives, and he was a big part of that.”

Rookie linebacker Barkevious Mingo had a great game on defense, as well.  He was the first round pick in this year’s draft.

“It was fun, man,” Mingo said. “It was everything I thought it would be. I enjoyed being out there with my teammates and just really enjoyed getting back to playing football.”

The NFL betting spread for the Lions and the Browns is listed as a pick’em.